It was an overcast morning, but it was warm (in the mid-70’s) and didn’t look like rain so we decided to walk along the beach 8 kilometers from La Entrada to Olón and Montañita Ecuador. The beach was virtually empty all the way to Olón, except for a giant whale!

Choco is the resident greeter, security guard and activities director at Villa de Los Sueños, the B&B where we stayed on Ecuador’s Southern Coast. Most mornings, we went for a walk on the beach toward Olón and Choco joined us to play rock.

Choco loved chasing the rocks that I threw for him. He tried to fit all of them in his mouth, every rock I threw on our walk, and then he brought them back to the B&B. There were little piles of rocks all over the grounds, and even one on our 4th floor balcony. He has quite the rock fetish!

The beach in front of the B&B and La Entrada has lots of interesting rock formations. It’s not nearly as sandy as the rest of the beaches in the area, but it is beautiful to look at and to watch the waves crashing against them. Like most beaches in the world today, there was quite a lot of small pieces of plastic on this stretch of beach that needs to be picked up.

Amelia is in heaven. We went to the coast during Ecuador’s winter season so Cuenca at 8,000 feet had been quite chilly for the previous couple of months. Even though it was overcast, she was very happy to be warm.

Most of the beaches on Ecuador’s Southern Coast look like this. They’re extremely flat and wide when the tide is out, but they almost completely disappear when the tide is in. The B&B had a tide clock in the dining room area so we knew when it was safe to walk on the beach. The tide comes in rapidly and you wouldn’t want to get caught on the beach when it disappears.

We were surprised at the low number of people on this beach. We saw a few children playing on a couple of different walks, but for the most part, we had it to ourselves. It’s the biggest beach I’ve ever been on, and the most empty.

I was filming Amelia and she saw a whale breaching behind me. I trained my camera on the spot and luckily caught this big Humpback Whale breaching just a short distance offshore. We saw Humpbacks from our balcony and the beach on several different days. On the last morning of our trip, we saw a pod of Killer Whales from our breakfast table at the B&B.

You’ll see more whales up close and personal on our whale watching tour in the next video.

The beachfront between La Entrada and Olón had lots of big, beautiful houses. Some of them were for sale if you’re interested! However, with the rapid rise of the oceans, these houses will likely be under water in the next 50 to 100 years. The ocean is already knocking on their doorsteps at high tide.

We were also surprised to see motorcycles and trucks driving on the beach at high speeds. It seems that everyone in Ecuador drives at a high rate of speed, but we didn’t expect to see that on the beach. However, since it’s so wide and flat when the tide is out, I guess it’s a fast way to travel. Not a lot of traffic, either… 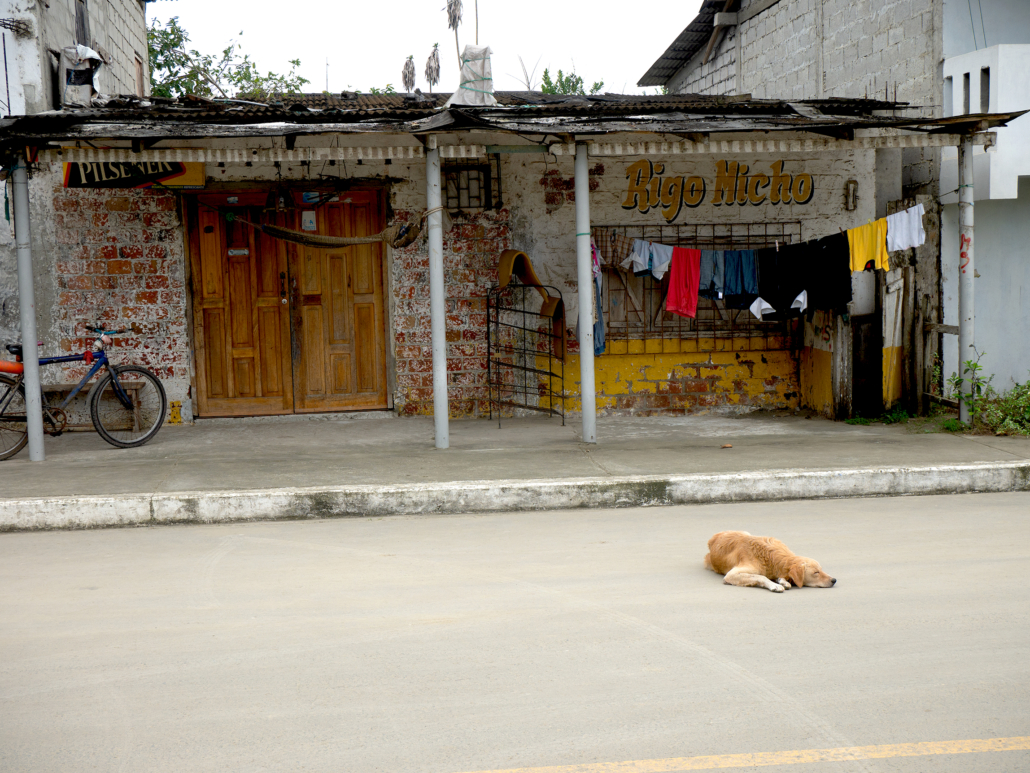 The first town we stopped at on our walk to Olón and Montañita was La Curia. It was a tiny little pueblita with a church, lots of chickens and, of course, several street dogs. There wasn’t much (any) traffic in town so this dog was taking a mid-morning nap in the middle of the street. 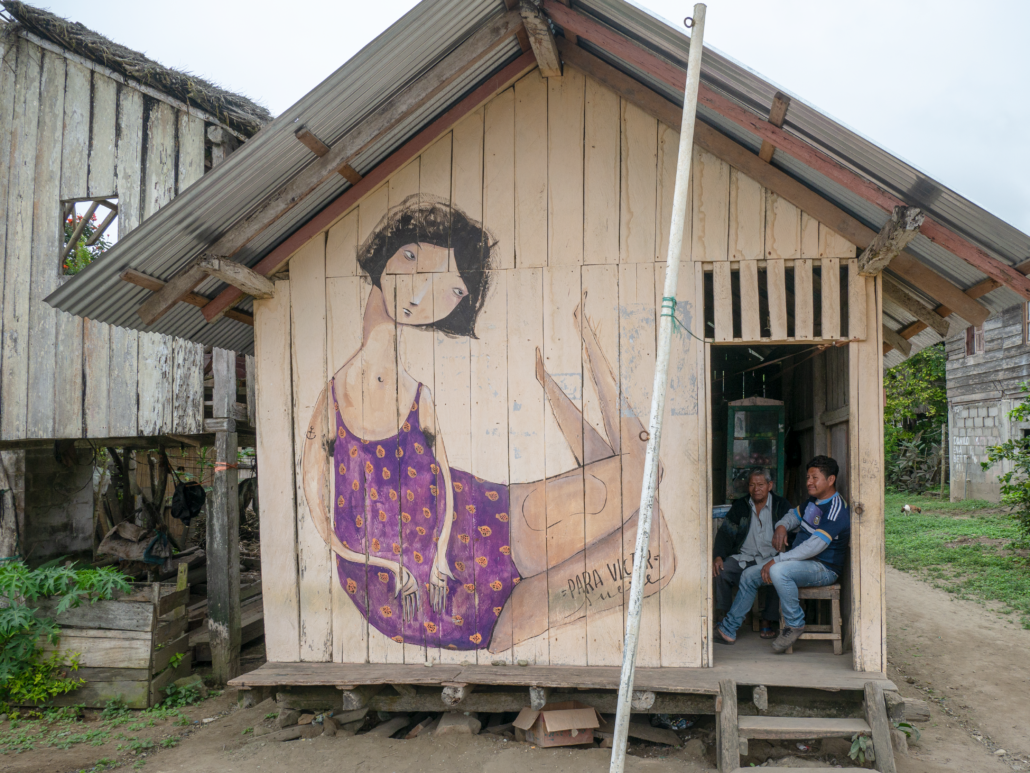 These guys were more than happy to let me take a picture of their cool mural and old building. Murals are very popular in Ecuador. The tiny pueblita of La Entrada has over 25 and growing. 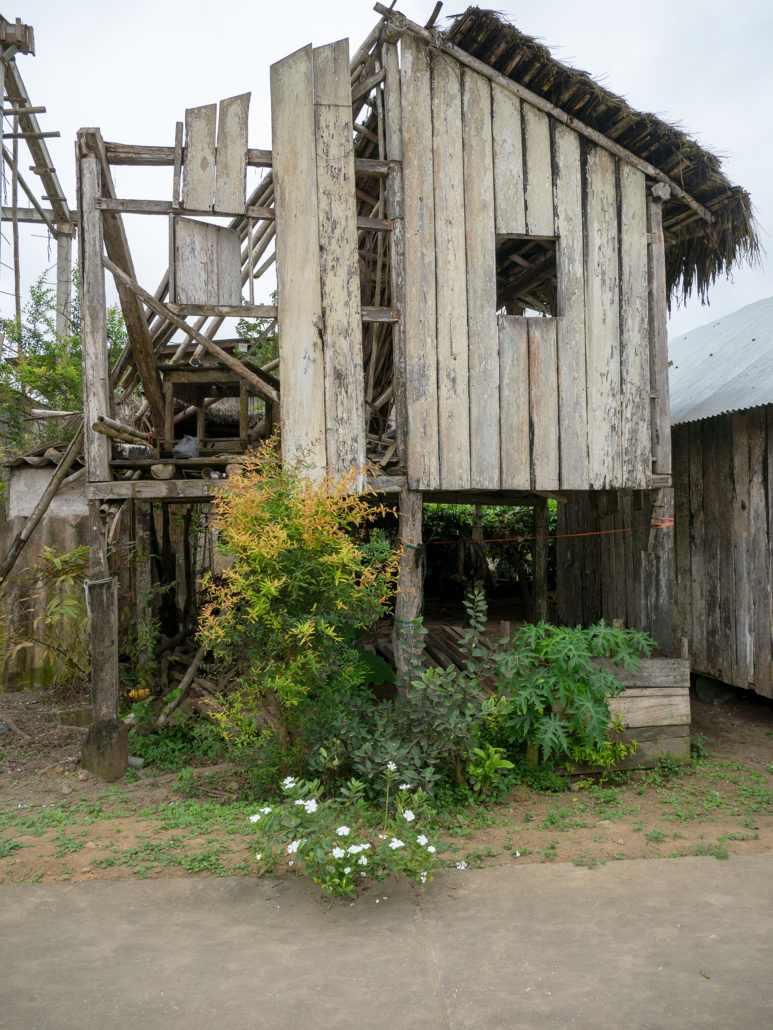 This is a real fixer-upper. We saw lots of these run-down old buildings and houses in the pueblitas along Ecuador’s Southern Coast. La Entrada is the rare exception. Most of the old buildings have either been torn down or renovated there. The people of La Entrada have a large rehabilitation project going on, spearheaded by Shell, the owner of Villa de Los Sueños. You can see more of the La Entrada in a future video.

Everyone in La Curia was super friendly, and showed off their big smiles and happy greetings to the wondering gringos.

Our next stop on the beach walk was Olón. It’s a larger town than La Curia and popular with surfers. We spotted this sign that sparked Amelia’s fancy.

We were starving by this point so we walked straight through Olón and got on a bus to Montañita Ecuador. We were surprised to see them showing a movie with Jason Statham, dubbed into Spanish. It’s quite funny to hear a deep, sophisticated latino voice coming out of The Transporter!

The bus ride between Olón and Monañita Ecuador took about 10 minutes and cost us 50 cents each.

Montañita Ecuador is known as a party town. Young people come from Guayaquil and other parts of Ecuador on the weekends to party and surf. This picture was taken atop the 10 foot high retaining wall, or malecon in Spanish. The ocean is already creeping up to Montañita’s doorstep and this wall helps keep out the high tide and storm surges.

Montañita Ecuador is quite the tourist town. It reminds me of pretty much every beachfront tourist town I’ve been to in other parts of the world. Nearly every store is either a restaurant or souvenir shop.

Believe it or not, we saw cars driving down these streets. However, most vehicles were push carts like these that were selling or transporting things to local shops.

While Ecuadorians do love their helado (ice cream), we have yet to see an ice cream truck. Instead, these types of fruit carts and stands can be found everywhere. Most of them will even cut up the pineapples for you.

Amelia found this vegan restaurant, Amor Infinito, on TripAdvisor.com. When we left the B&B, our goal was to have lunch here, but since the walk took much longer than an 8K walk should take, we had a very LATE lunch here.

We really enjoyed the vegan food and beachfront seating at Amor Infinito. I talked to the owner and he said his wife decided they needed to eat a healthier diet, so they changed the restaurant to all vegan.

They offer a daily almuerzo (lunch special), as well as vegan cerveza and other beverages. The food was delicious! It came with fresh squeezed juice, the main course (see pic above) and fresh fruit for dessert.

We went to the coast during the off-season, so there weren’t many people on the beach. However, all of the tables at Amor Infinito were full (see above) while the neighboring restaurants were nearly empty (see below). I think that says a lot about the quality of the food and the growth of veganism.

We highly recommend checking out Amor Infinito on your next trip to Montañita.

I swear Amelia could spot a vegan restaurant from space! We were walking down a busy, crowded, visually stimulating street and Amelia spotted this restaurant from more than a block away!

Carlos is the owner, cook and waiter of Govinda Prasad. He’s also a great baker (more on that below). We ate lunch at his restaurant two different days and really enjoyed the food. In addition to being plant-based vegan, our lunches also had very little to no oil, making them the healthiest dishes we ate in Montañita. We loved all the fresh veggies!

In this part of Ecuador, most of the bread is made with manteca (aka lard). As vegans, we avoid all animal products. As healthy plant-based eaters, we wouldn’t dream of eating lard or anything like it! We had a hard time finding lard-free bread on the coast, so we asked Carlos if he knew where we could get some and he offered to make it for us. Since they’re fresh-baked, he needed a little notice and had them ready for us the next day.

We went back the next day and he had two loaves of whole wheat oat bread ready for us, fresh from the oven. They were still warm! He sold them both to us for $5. They were so good that we went back on our last day at the coast and bought two more loaves for the trip back to Cuenca.

We highly recommend this restaurant and Carlos’s healthy vegan bread on your next visit to Montañita.

We hope you enjoyed the second part of our trip on Ecuador’s Southern Coast to Montañita Ecuador. Please remember to like, comment and share our video, and also subscribe to our YouTube channel. If you’d like us to make a video about something specific or if you have questions, please let us know in the comments.