When Stephen said he wanted to come visit us here in Cuenca Ecuador, his main request was to do some adventure sports. Lucky for him, our friend Pietro is a rock climber and we have a great climbing mountain not far from Cuenca called Cojitambo.

If you missed our last video showing Stephen playing like a kid at Aventuri Cuenca, you can check that out here: Aventuri Adventure Park in Cuenca.

We started our day by taking a $2 cab ride to Terminal Terrestre de Cuenca near the airport. From there, we took two buses to get to the base of Cojitambo. 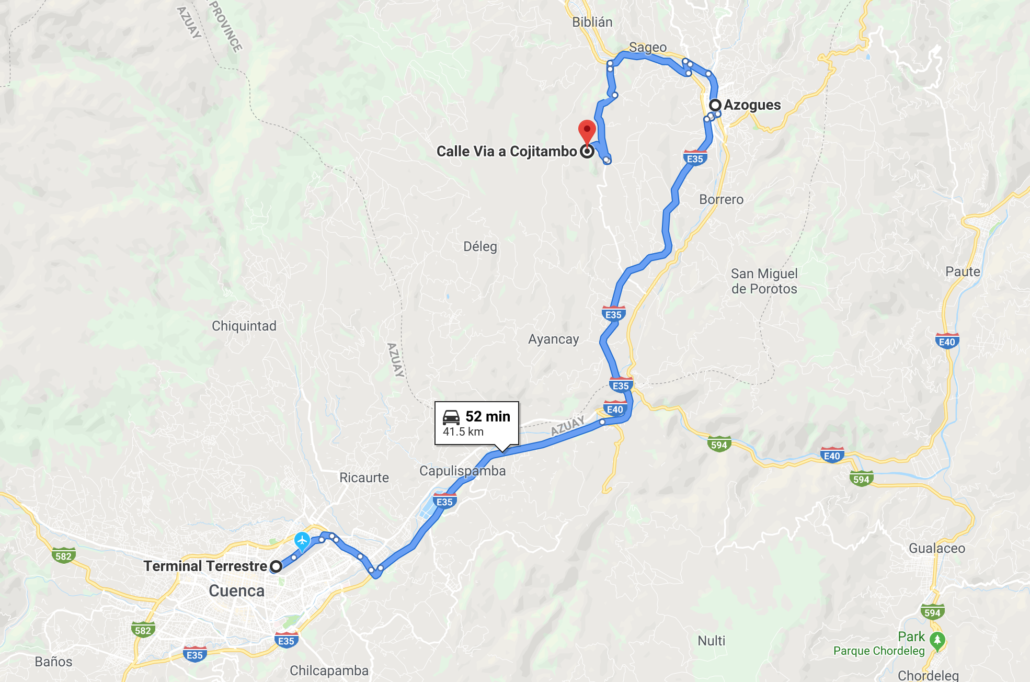 It costs 10 cents to enter the area where the buses are located. Pietro bought the tickets for us at this kiosk, which allowed us to enter through the gate to the bus loading zone. 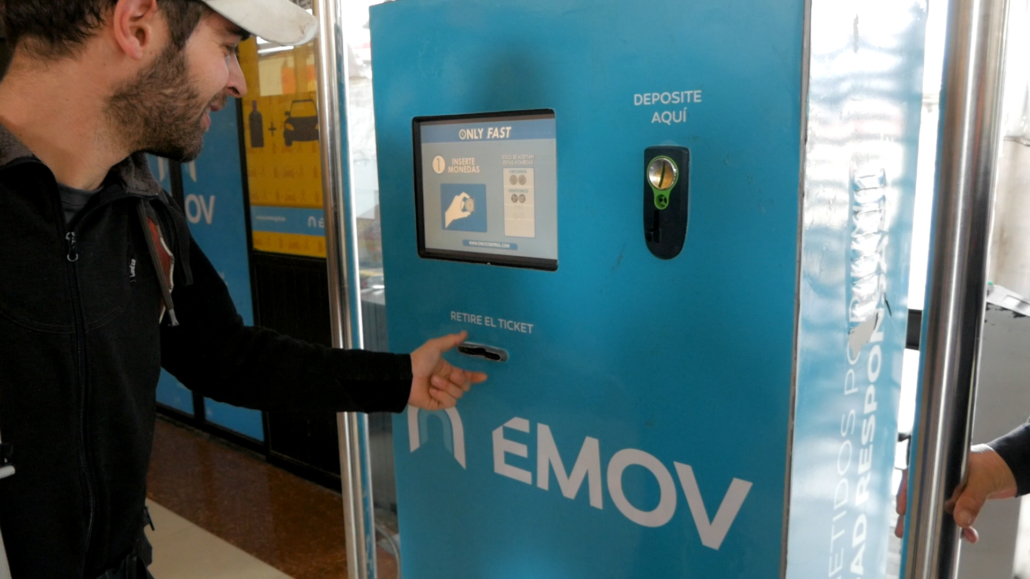 The bus ride from Cuenca to Azogues was 75 cents and the bus ride up to the base of Cojitambo was 50 cents. In total, counting the cab rides, we spent $4.70 to get to Cojitambo and another $4.50 for both of us to get back home.

The Terminal Terrestre “Segundo Serrano” in Azogues is much smaller than Cuenca’s bus terminal, but it does have several food vendors and shops, plus a bathroom. Stephen walked into el baño de las mujeres (on the right) and was quickly ushered out by the bathroom attendant. Pietro said that Stephen must have thought he was in Scotland and the ladies bathroom sign must have represented a kilt. ? 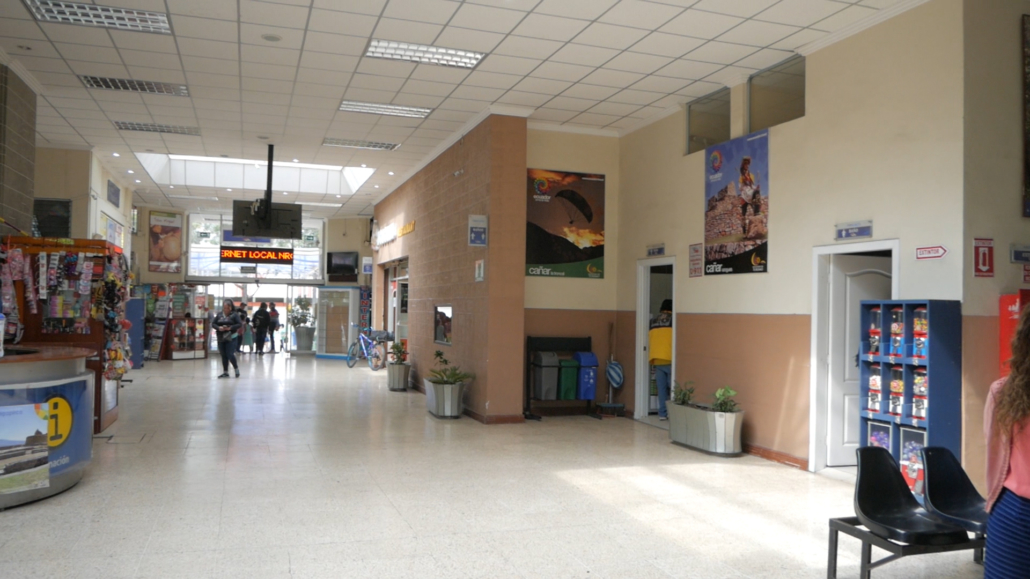 We changed buses to go from Azogues to the base of Cojitambo. 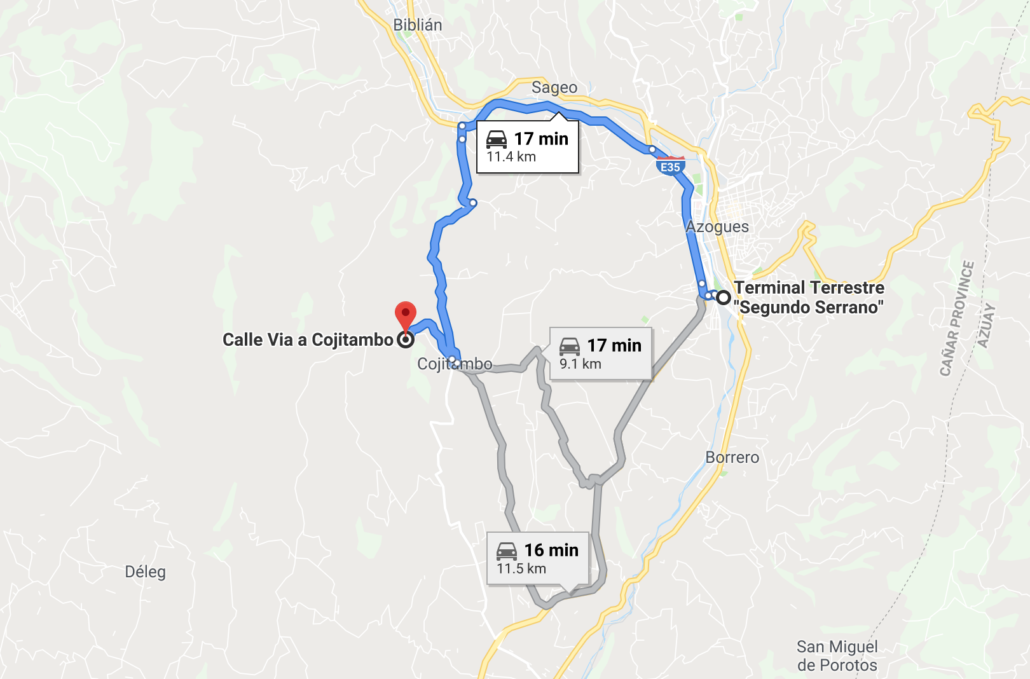 The bus dropped us off on the main road and we walked about 1 to 2 kilometers up a dirt road to the base of Cojitambo. 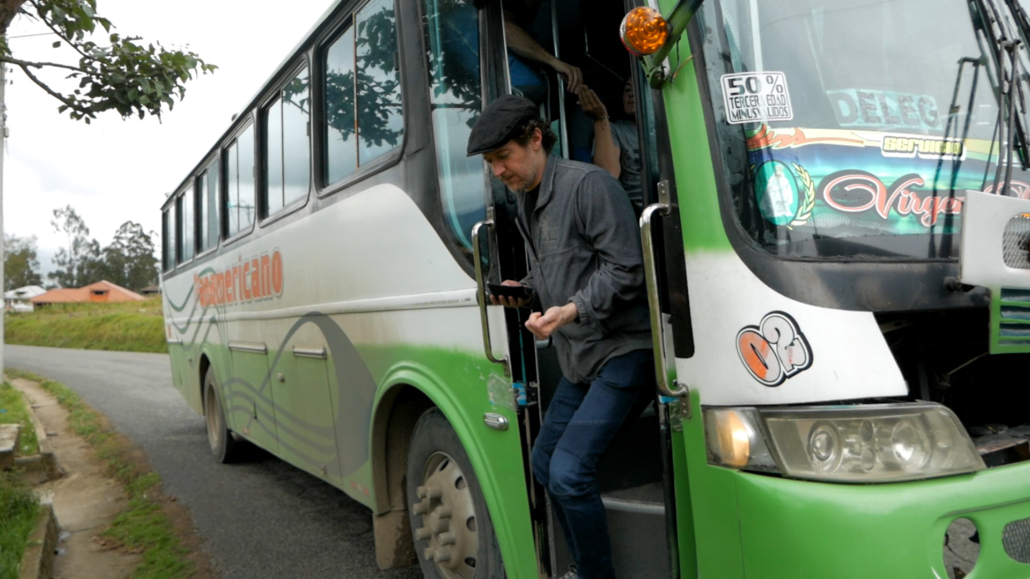 Amelia and I visited this mountain on our exploratory trip just over 2 years ago. On the top of the mountain there are more Inca ruins and beautiful views of the surrounding area. You can even see the Biblián Church from there.

We went to the base of one climbing wall, but right when we arrived there, it started raining really hard. 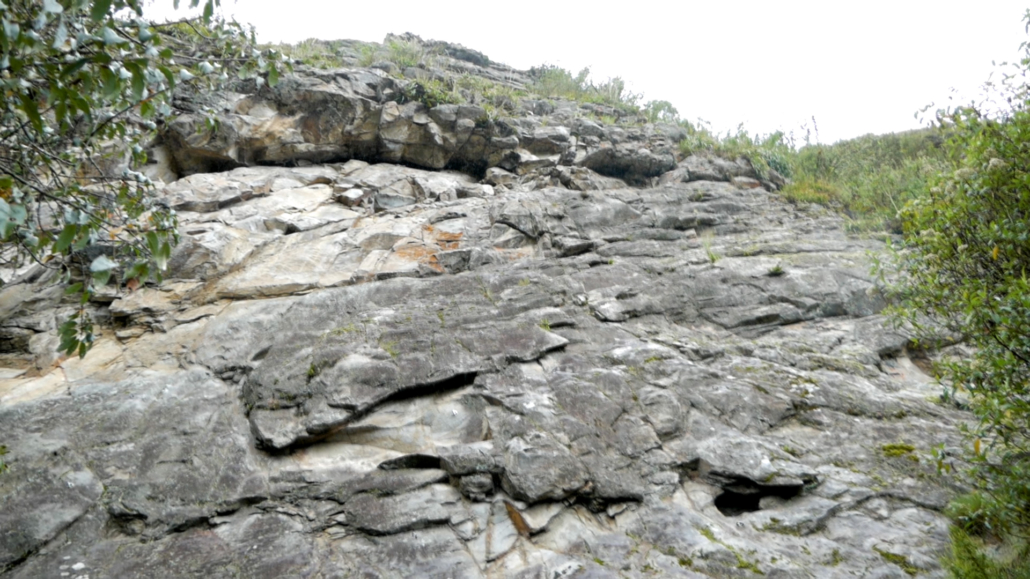 Pietro said it would be too difficult to climb that wall in the rain so we walked a little further up to a wall that wasn’t as steep. 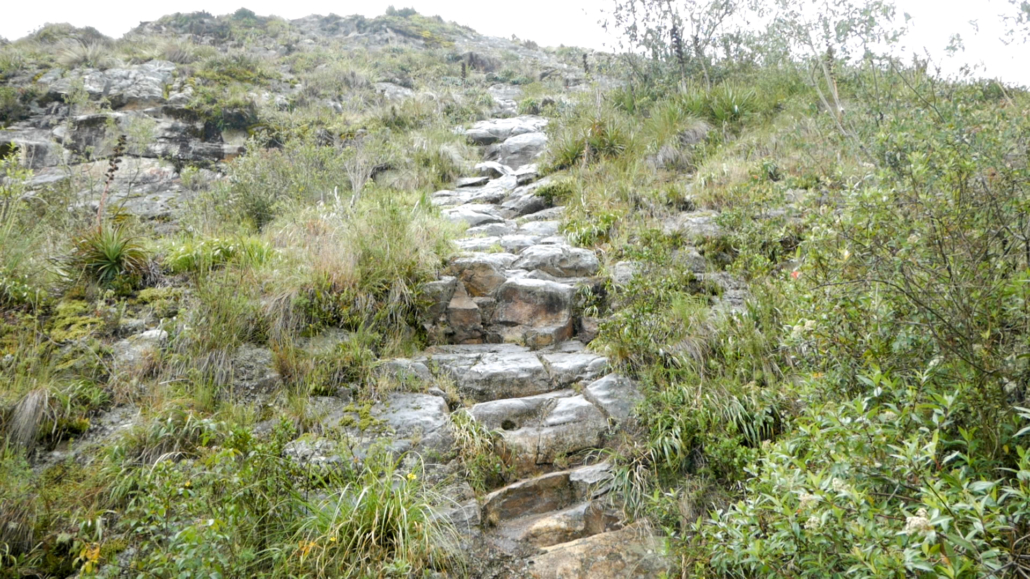 It was raining very hard but they still climbed anyway. You can see the rain in the video and this picture. 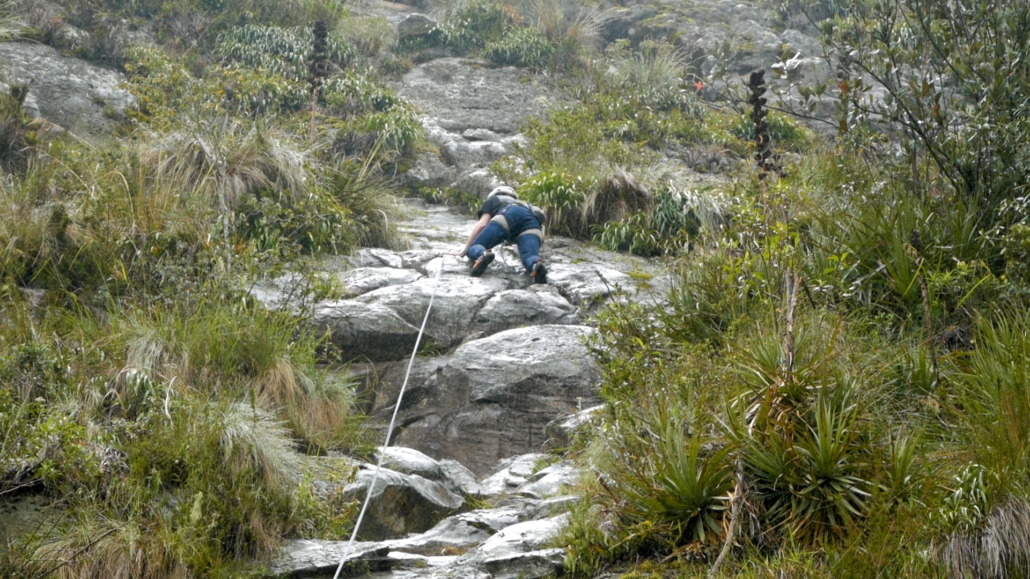 I was really impressed with Stephen’s climbing ability. He scurried up the wall like an expert! And in the rain, no less! 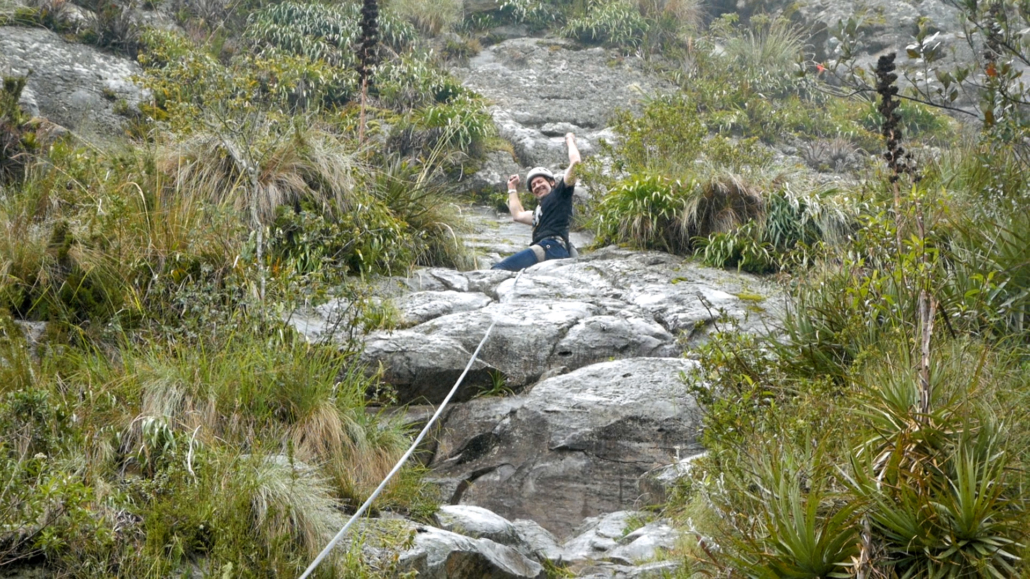 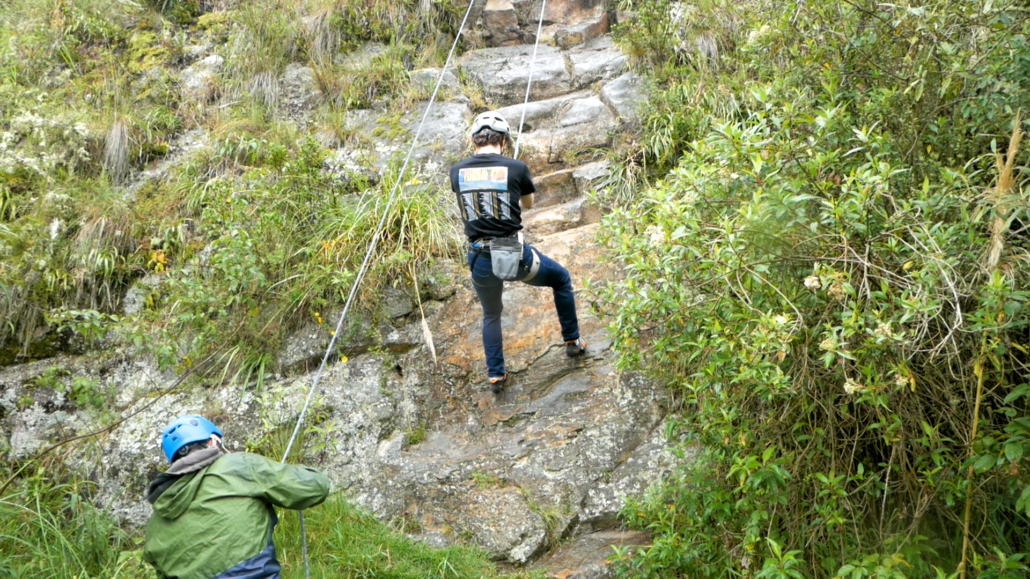 After Stephen repelled back down from his climb to the first pitch, he and Pietro went back up to the second pitch, which was higher and steeper. 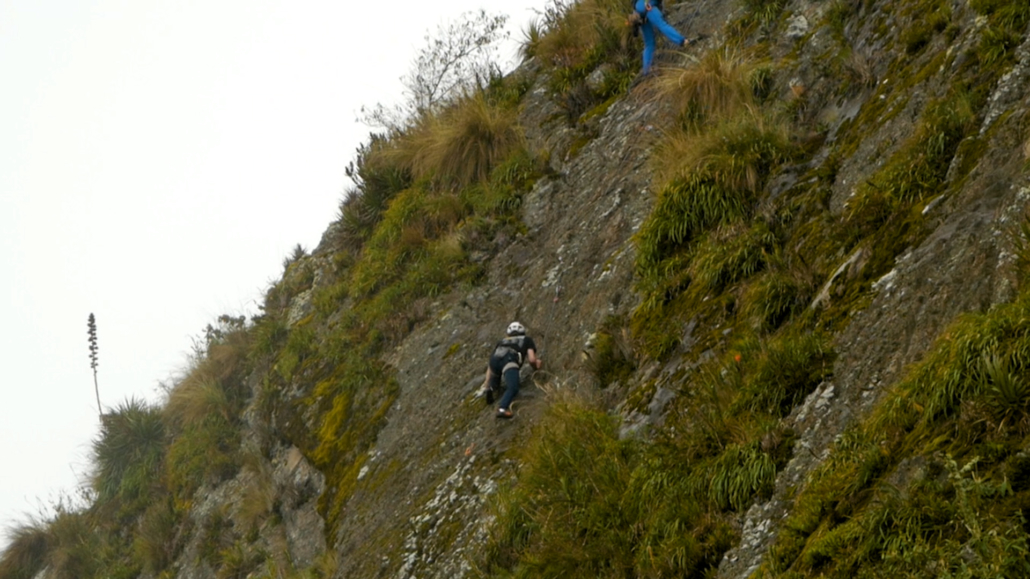 If not for the rain, they would have kept climbing, but we were all soaked so after two climbs, we called it a day and headed back to Cuenca. You can see how hard it was raining from the river running down the road. 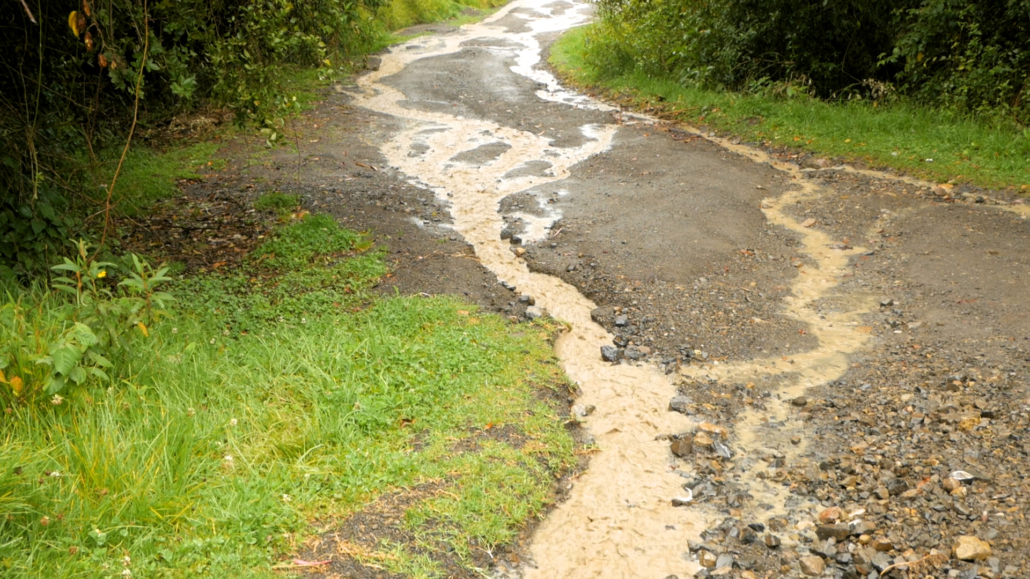 It was so wet, this cute little bug couldn’t keep his wings dry despite his best efforts to wipe them clean with his leg. 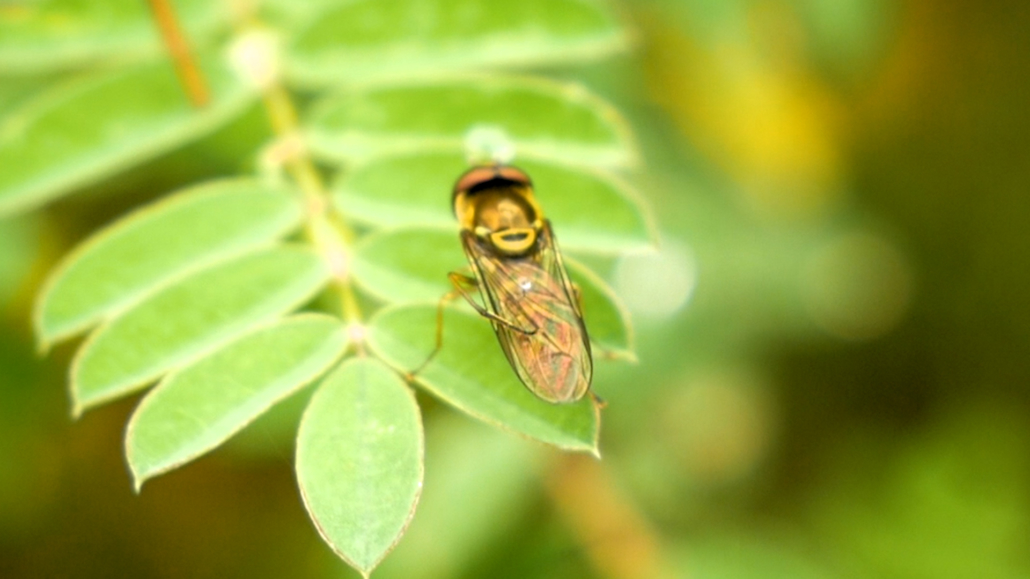 Here are some stills of the flower shots I took. 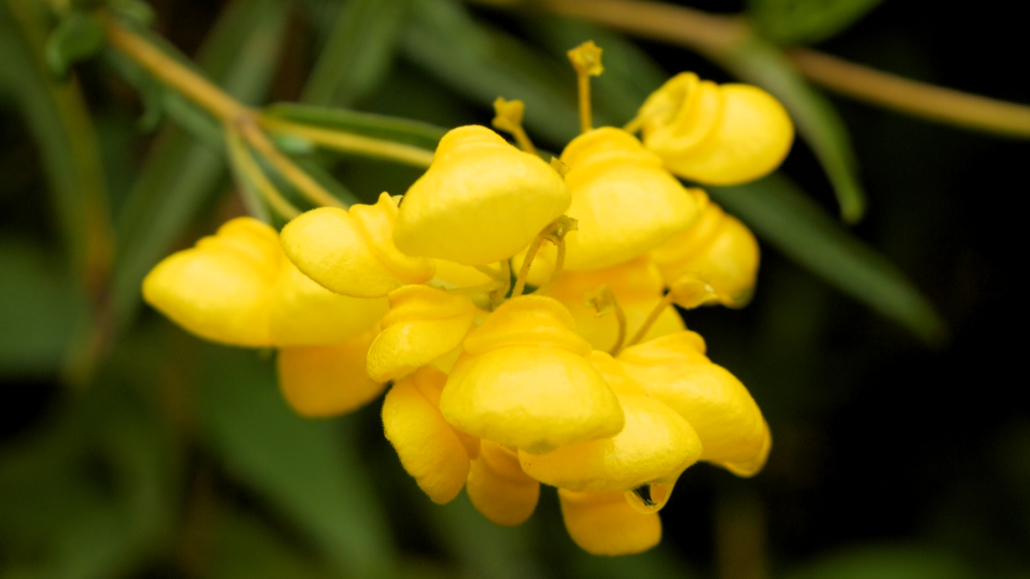 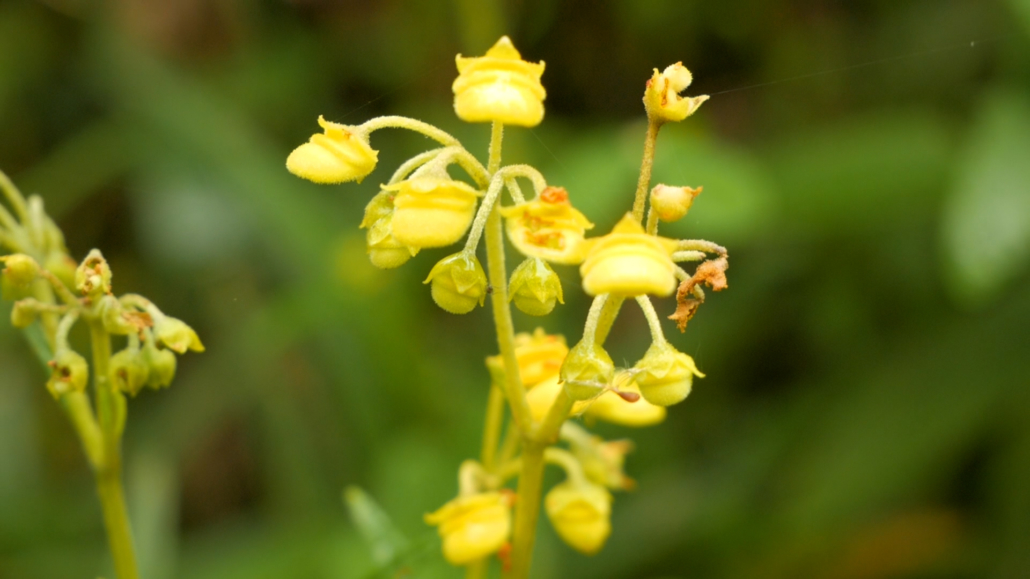 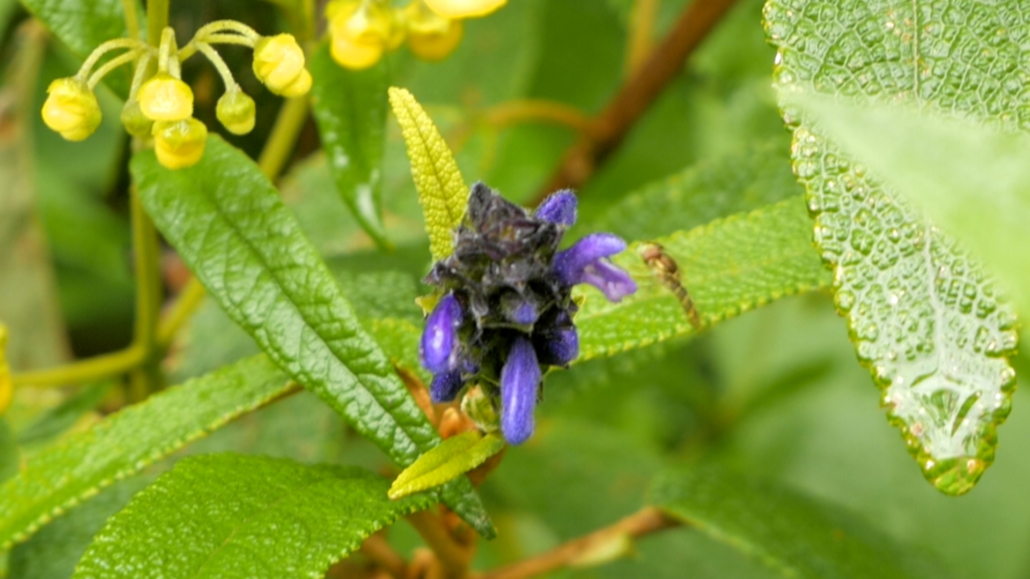 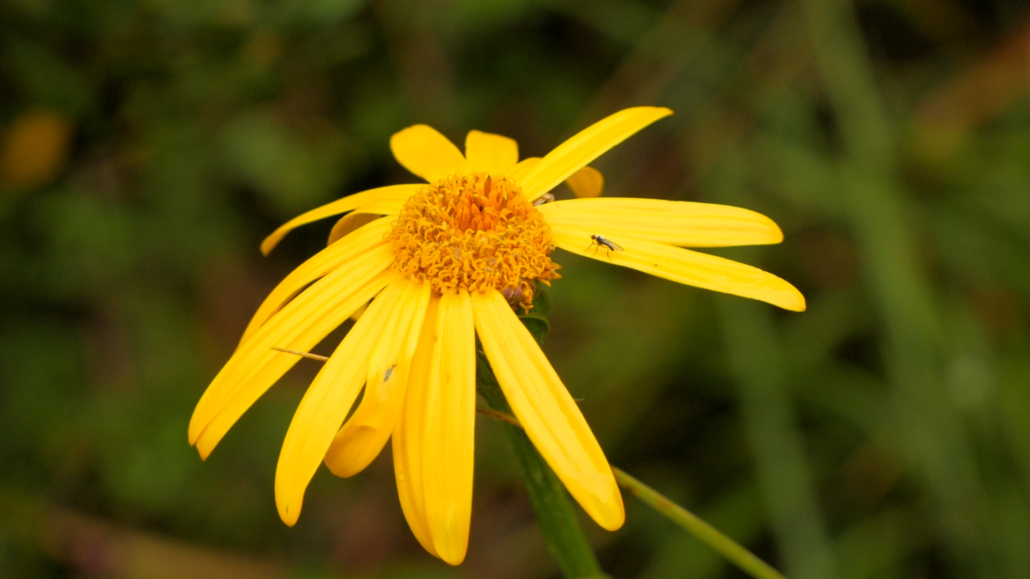 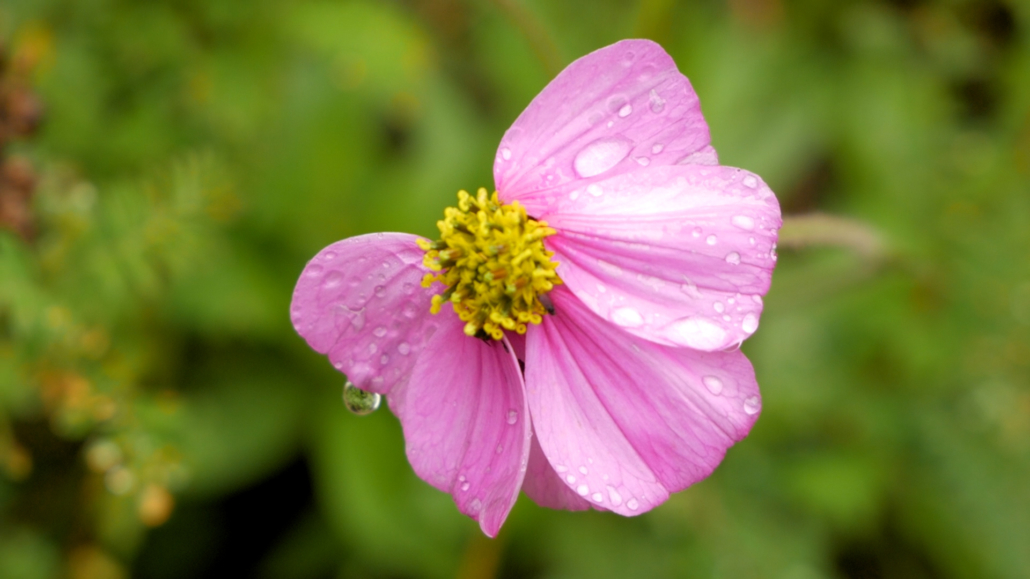 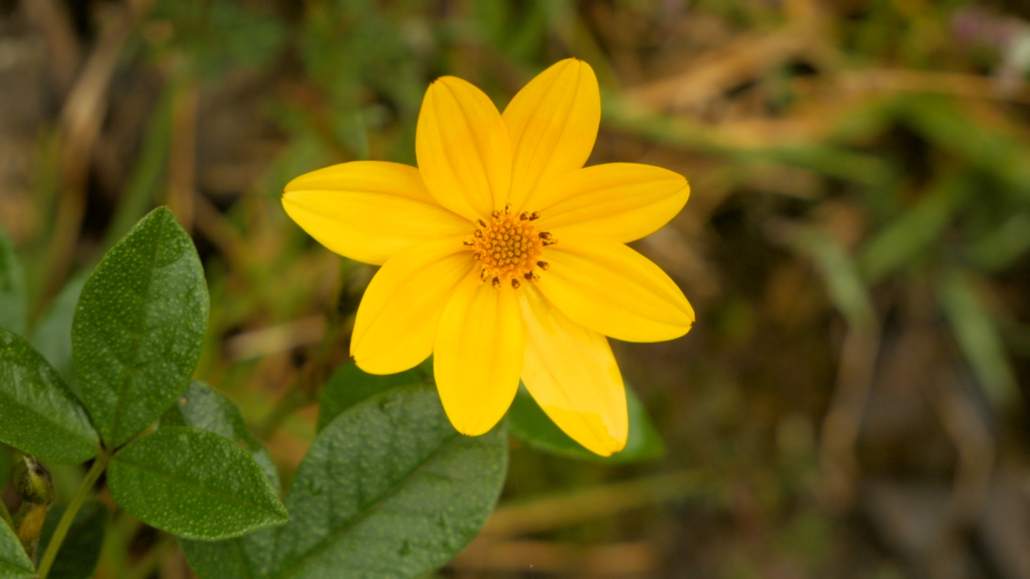 On the walk back down the road to the catch the bus back to Azogues, we saw lots of chickens with dogs maintaining a watchful eye on them. 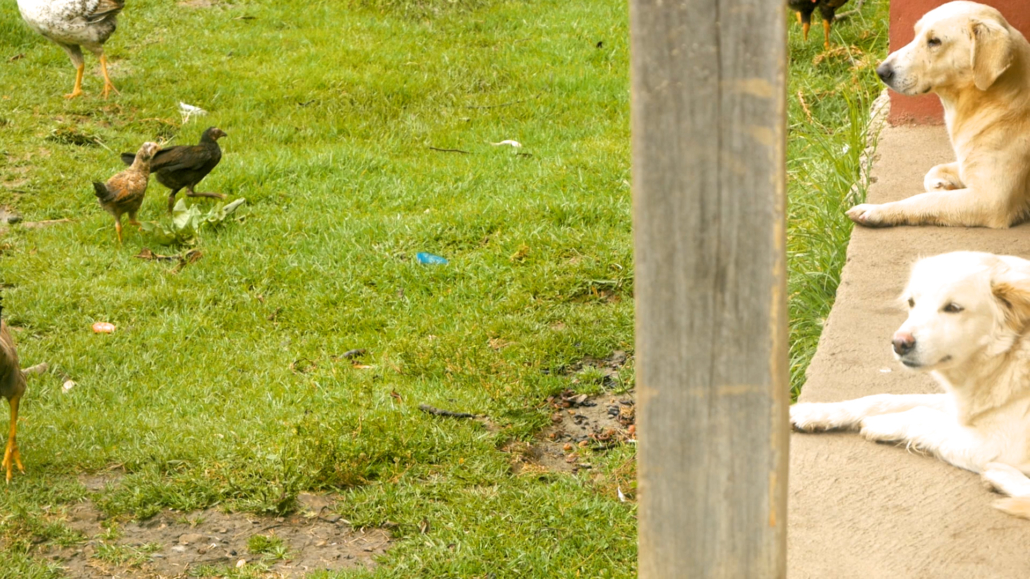 Rooftop dogs are a common sight in Ecuador. These guys were so cute! 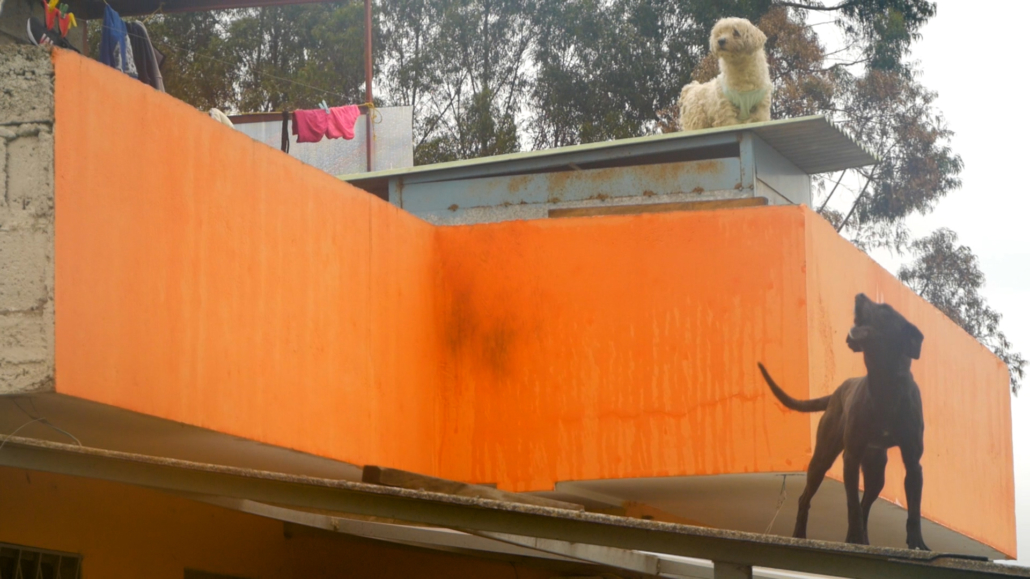 Just as we reached the end of the dirt road, a bus going back to Azogues stopped to drop some people off and we hopped on to start our journey back to Cuenca. It was sunny for most of our walk down the mountain, but it started to rain again as we approached the main road. You can see the water on my lense. 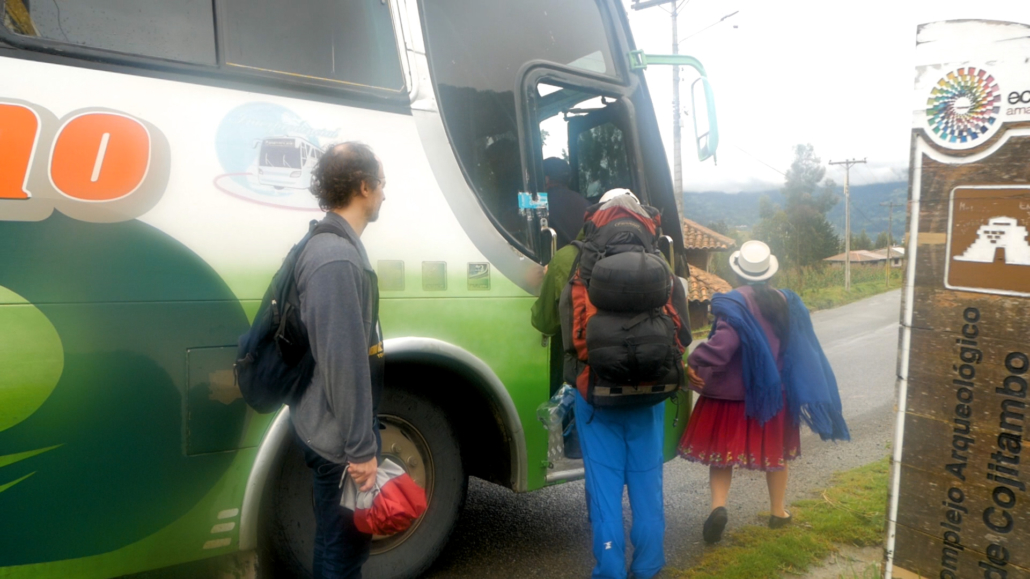 Our friend Stephen is visiting us from Denver for a few days and he requested some adventure activities while he’s here. Our first stop was at the Aventuri Adventure Park in Cuenca Ecuador next to the white Turi Church.

In our next video, Stephen goes rock climbing in Azogues so be sure to check that out.

The park costs $1 to enter and that comes with a few basic attractions plus beautiful views of Cuenca. Stephen did every available attraction and paid a total of $15 including the $1 entry fee. The sign below shows something that looks like bungee jumping, but that wasn’t available. 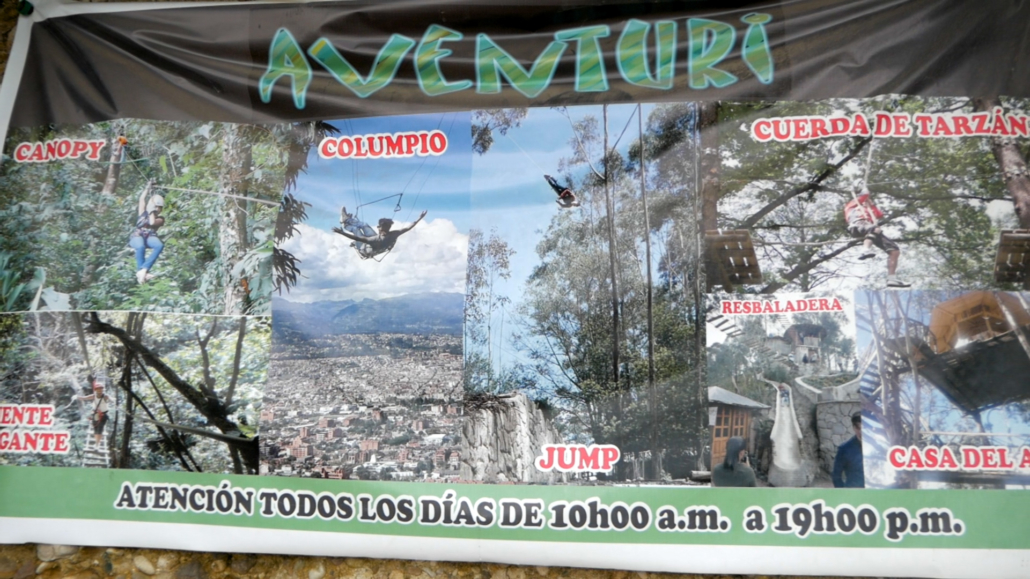 Stephen is quite the daredevil..this bridge is very high off the ground. There is no way I would EVER do that! 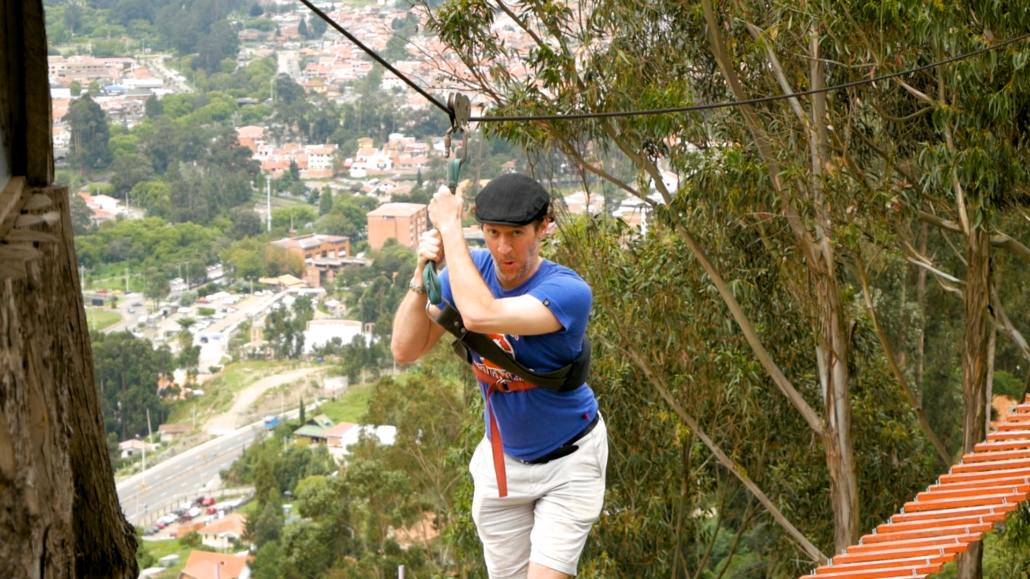 They also have 3 zip lines. 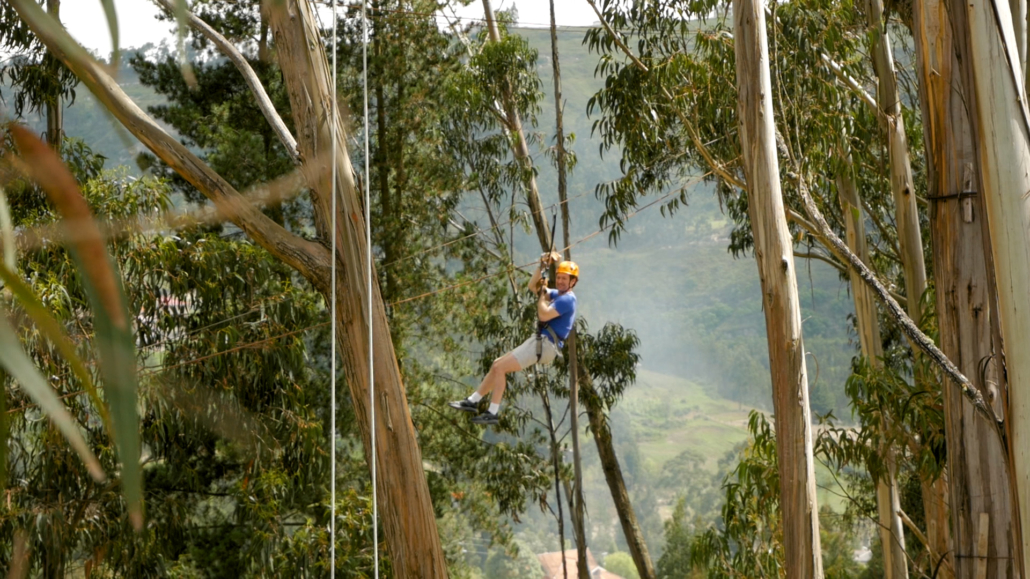 Aventuri is famous for this swing, and it didn’t disappoint. It provides amazing views of the city. 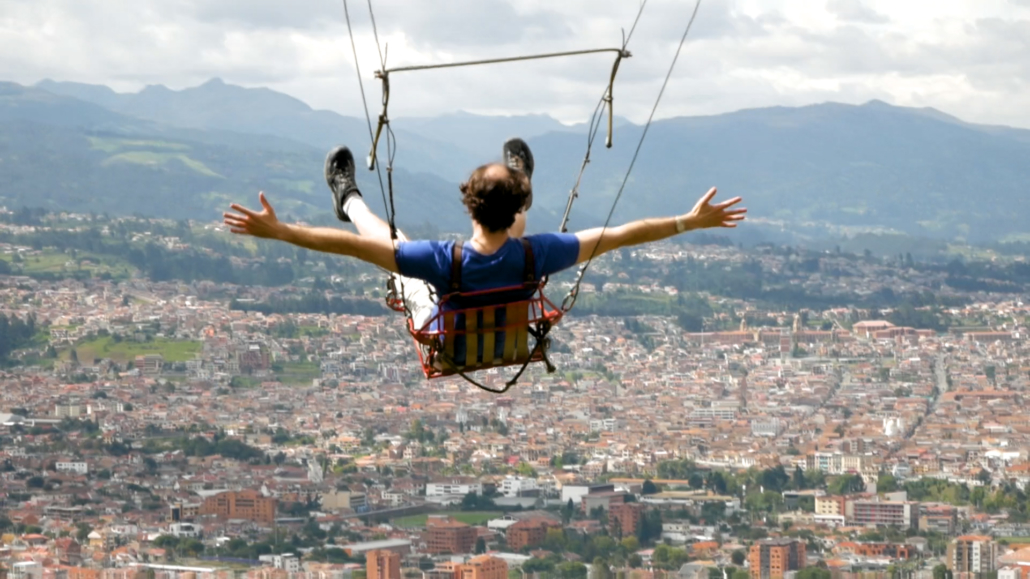 Amelia preferred this more relaxing gratis (free) swing, although she hurt her tailbone getting into it; it’s still not healed from her fall a couple weeks ago. 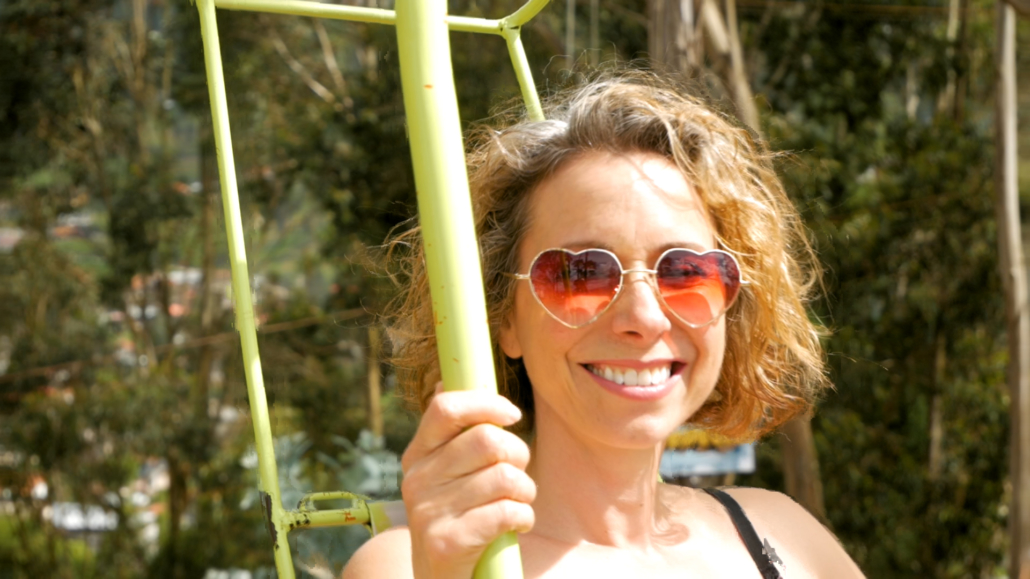 After Stephen did all the rides at Aventuri, we walked down the hill to Mall del Río to find Stephen a nice shirt for Salsa Dancing. You can see him dancing in our last video, Dos Cumpleaños + Salsa en Cuenca. 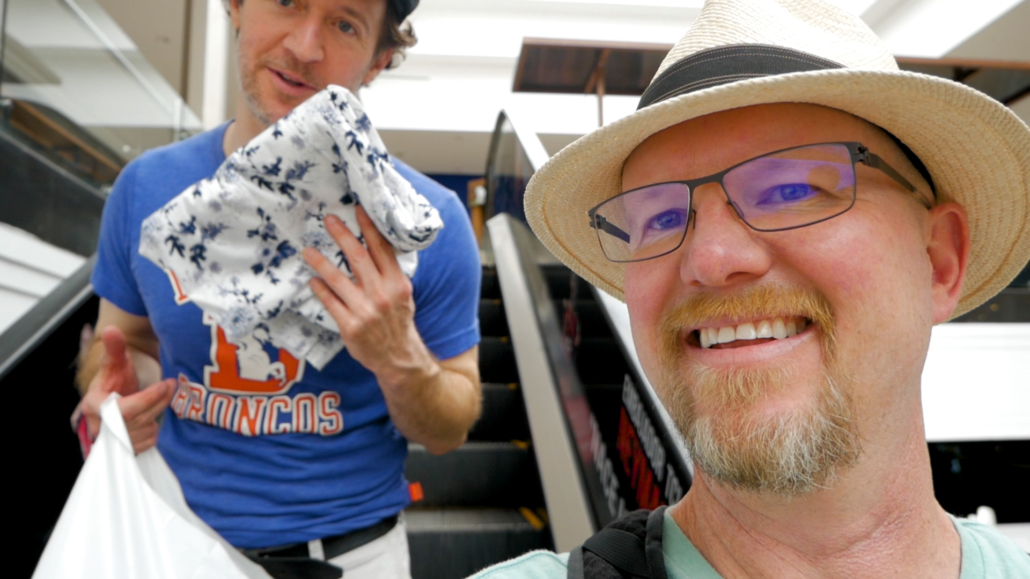