Most of Amelia’s family lives in Atlanta, GA so we went back to help them out for a few weeks. We took a $12 buseta with Operazuaytur from Cuenca through Cajas to Guayaquil the day before our flight and stayed one night in the Courtyard that’s close to the airport before our return to the states. Our flight left Guayaquil for Miami at 6:40 AM so we wanted to be nearby.

Return to the States from Cuenca Ecuador

Amelia was a regional sales rep in her previous life so she logged a lot of points with Marriott by staying at Courtyards. This one in Guayaquil was the nicest Courtyard either of us has ever seen. Plus, we were able to use Amelia’s points so it didn’t cost us anything.

After a $5 taxi ride from the buseta station, we arrived at the hotel in time for dinner. A short walk down the street in Mall del Sol is a sushi restaurant called Noe that’s vegan friendly. We have a Noe near our house in Cuenca and eat there for special occasions. It’s a beautiful restaurant with delicious food (think P.F. Changs), but it’s pricey for Ecuador. This meal with sake cost about $80. 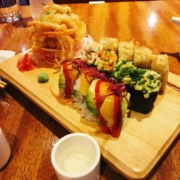 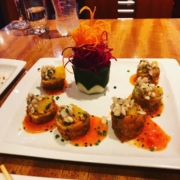 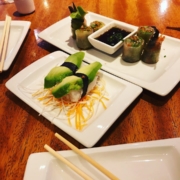 A wakeup call from the concierge and another $5 cab ride had us at the Guayaquil airport by 5AM. It’s a beautiful, modern airport with NO vegan meal options. A couple vendors sell fruit and snacks that might be vegan, but we didn’t see any vegan options on any of the restaurant menus.

It’s the worst, most unhealthy food you can imagine; mostly fried animal parts. Hopefully they’ll catch up to the times soon and start offering some vegan meals, ideally not fried.

The Miami airport wasn’t much better that Guayaquil in terms of vegan food. We walked a LONG way up and down the D terminal and found only a few vegan options and no healthy options. The Veggie Burger at Shula’s is NOT vegan. They were kind enough to get the package for us and it contains both milk AND cheese. 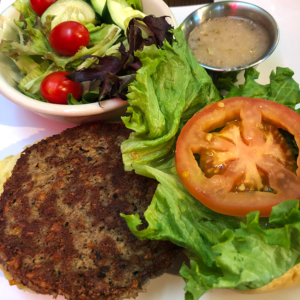 There’s a Mexican restaurant that has a vegan option: rice and beans topped with fried veggies. But we opted to try the Impossible Burger at the Corona Beach House restaurant that’s right by the security entrance.

We were both really impressed with how authentic the Impossible Burger tasted. It could easily pass for a conventional burger. However, we later learned that it’s not 100% vegan because it was tested on 140 rats to get the GRAS certification from the FDA.

Impossible Foods’ CEO Patrick O. Brown has been vegan for over 14 years and agonized over the decision to test their genetically engineered heme iron (the ingredient that gives the burger its meat taste) on animals, but he said “Avoiding the dilemma was not an option. We hope we will never have to face such a choice again, but choosing the option that advances the greater good is more important to us than ideological purity.”

Amelia and I had a long conversation about this moral dilemma. If they didn’t test on animals and didn’t get the GRAS certification, a lot of meat eaters might avoid the Impossible Burger and choose a cruelty burger instead. The Impossible Burger is also a lot more environmentally friendly, too. However, testing on animals goes against everything we stand for as vegans.

In the end, being vegan is about doing the least amount of harm and testing this product on 140 rats, which were killed and examined, may be doing less harm if more people eat the Impossible Burger because it’s perceived as safe. It’s impossible to know if that’s the case, but it seems like a valid concern.

Besides, we vegans aren’t totally free from harm either. A lot more than 140 rats are killed during the harvesting of our foods, especially wheat, corn, soybeans, oats and legumes. It’s estimated that 7.3 billion animals are killed each year during the harvesting process. Most of these deaths result from harvesting the 80% of grain that’s grown to feed livestock, but that still leaves a lot of deaths on our vegan hands. There are wild animal-friendly farming methods, but they’re not widely used and they aren’t used at all in factory farming operations.

Since the Impossible Burger was tested on animals, it can’t be considered vegan under the strictest definition of the word vegan. However, if more people choose it over a conventional burger because it tastes the same and/or because it carries a much smaller environmental footprint, I’d say that’s a big win for veganism and for the poor cows that would have otherwise been bred into existence, tortured for their entire lives and then brutally killed to make a greasy hamburger that people spend less than 5 minutes eating.

Sometimes life just isn’t black and white, as much as we might want it to be…. 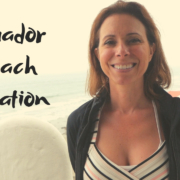 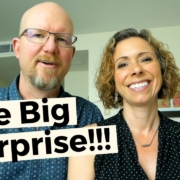