If you have any questions about living in Cuenca or would like us to make a video on a specific topic, please let us know in the comments. We also have an Ecuador Expat Info page with lots more videos and detailed blog posts.

There are a lot of Pros to living in Cuenca Ecuador. For our Cuenca Ecuador Pros and Cons, here’s a list of just our Top 10 Things We LOVE!

Knowing the currency is a real time and money saver. We don’t have to constantly do conversions in our head or wonder if we’re getting ripped off. This was one of the main reasons we moved to Ecuador. They don’t use dollar bills much, though. They use dollar coins and lots of 50 cent (cinquenta centavos) coins. 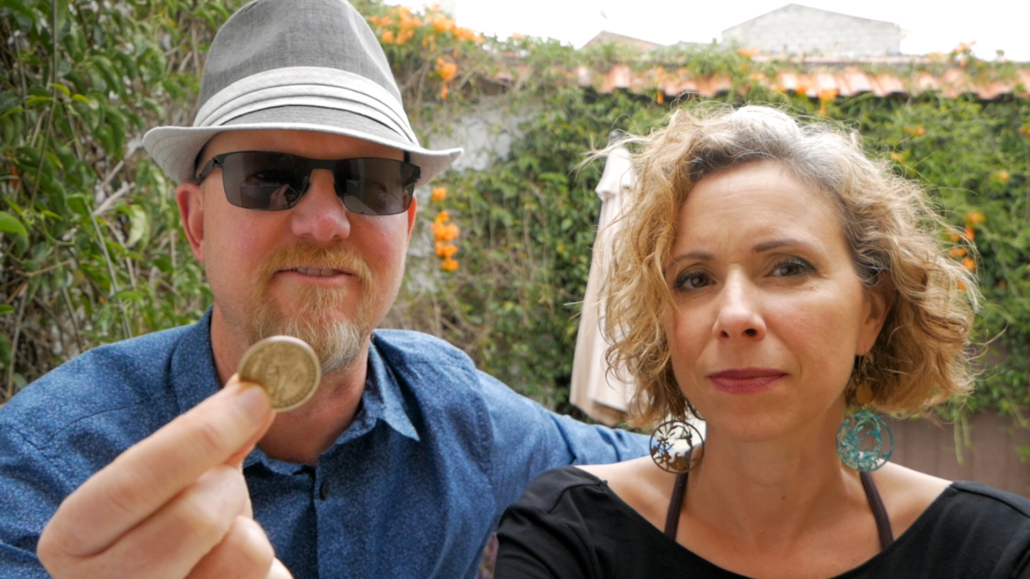 As vegans, we love the affordable, high quality, non-GMO, delicious fruits and veggies that we get at the mercado. We spend about $20/week on produce here, but back in the states, it was closer to $200/week for lower quality fruits and veggies. 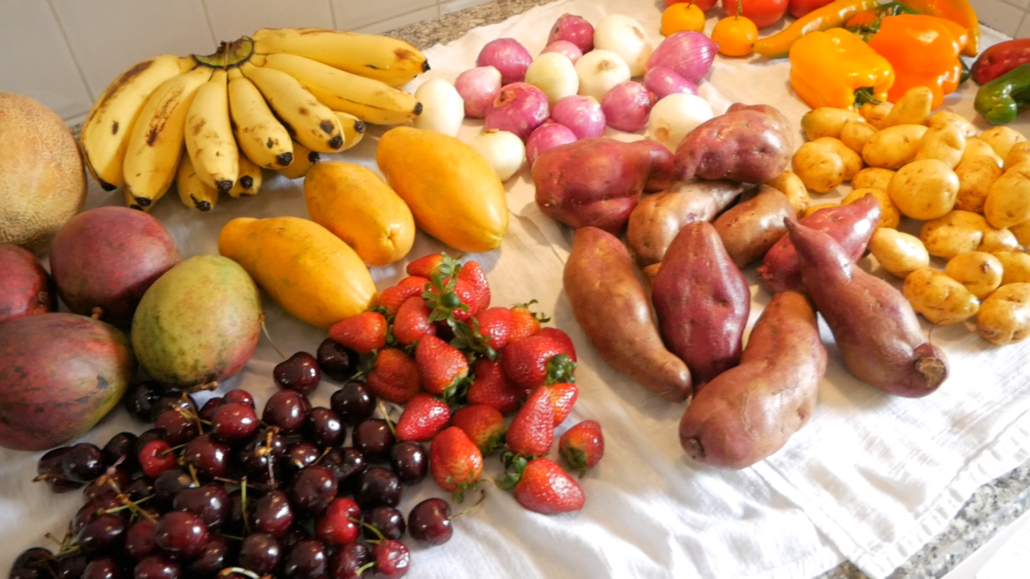 #8 The Cost of Living in Cuenca Ecuador

We live a comfortable upper-middle-class gentle-minimalist lifestyle here in Cuenca for less than 1/3 of our cost of living back in Denver, CO. Check out our video, Cost of Living in Cuenca Ecuador + Rental House Tour, for more info on our cost of living.

We don’t have a car and we don’t plan to get one because we walk everywhere. This city is very walkable and we typically log at least 10,000 steps per day. When we need to go a little further or it’s raining, cabs cost less than $3 to get most places in El Centro from where we live in El Vergel. Buses cost 31 cents. Walkability is certainly one of the Top 10 Things We LOVE About Cuenca Ecuador!

#6 It’s Easy to Be Vegan in Cuenca

The mercados are like candy stores for vegans. The produce is top quality and delicious, while being extremely affordable. Cuenca also hosts several vegan and vegetarian restaurants, with most other restaurants having a vegan or vegetarian section on the menu. The only places we can’t eat at are modeled after typical American diners and breweries. They serve only high cruelty, unhealthy, heart disease and diabetic fare. 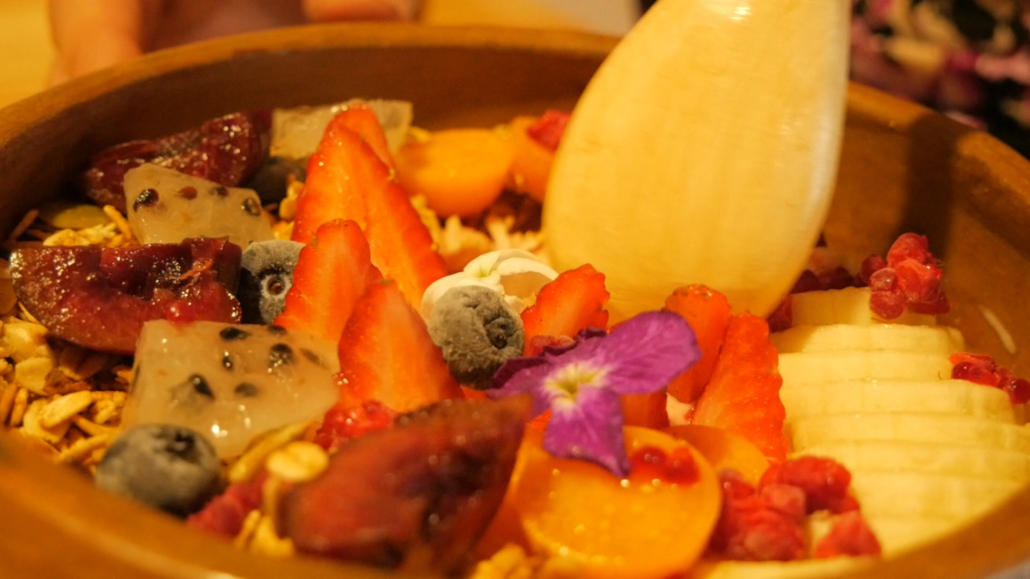 Living here feels like we’re on island time. Friends and family come first. Most people aren’t in a big hurry. And they work to live, they don’t live to work. It’s a breath of fresh air compared to our former frantic lifestyle back in the states.

Our house has fiber to the curb with Puntonet. We’ve heard Etapa is also a good provider. We’ve had one short outage in the 15 months that we’ve lived here. Compared to weekly outages and constantly slow service from Comcast in downtown Denver for $120/month, we’re extremely happy with our Internet service here. We pay $56/month for 50 Mb up and down. The 20 Mb plan costs $35/month.

Along with the dollar, this was another main reason we moved here. It’s nice to be able to avoid plastic water bottles for all of our water needs. Some people install filtration systems, but the replacement filters are hard to find and very expensive. It’s just nice to not have to worry about it. 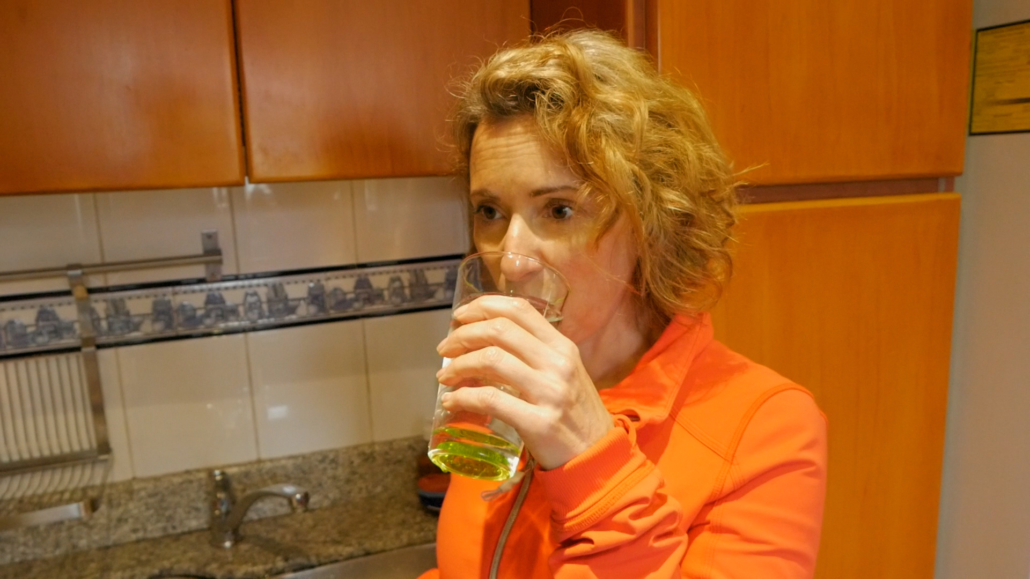 Cuenca and the entire country of Ecuador are home to some of the most beautiful places on this planet. From deserts to rainforests and from beaches to mountains, this country has it all. It’s hard to describe or even show the level of beauty in pictures or videos. You really have to see it for yourself. 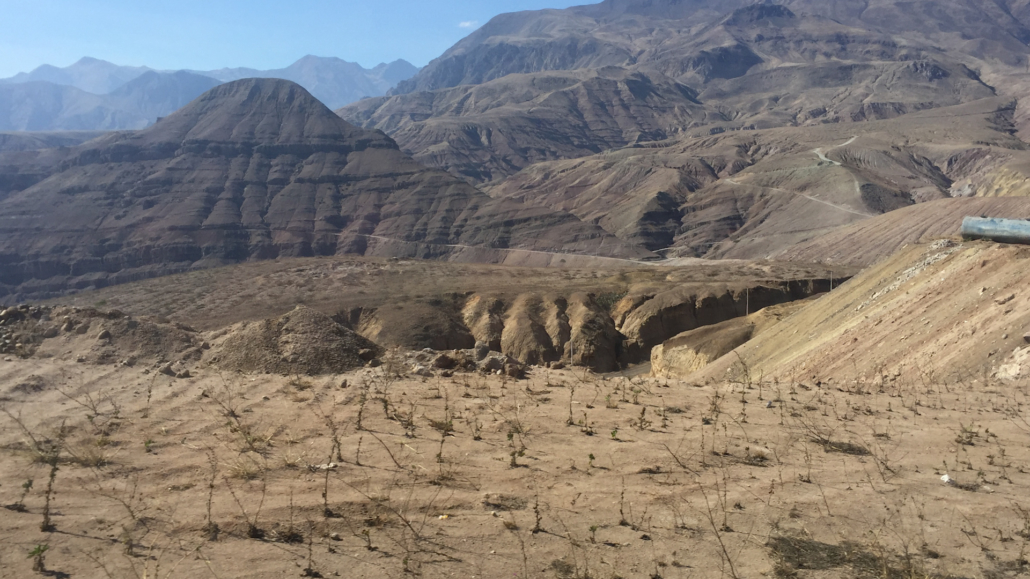 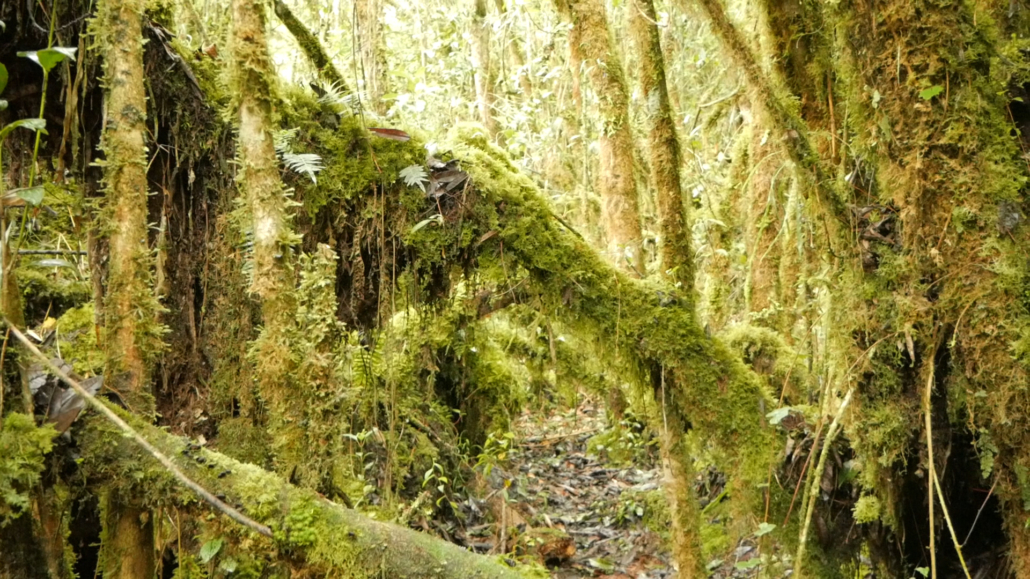 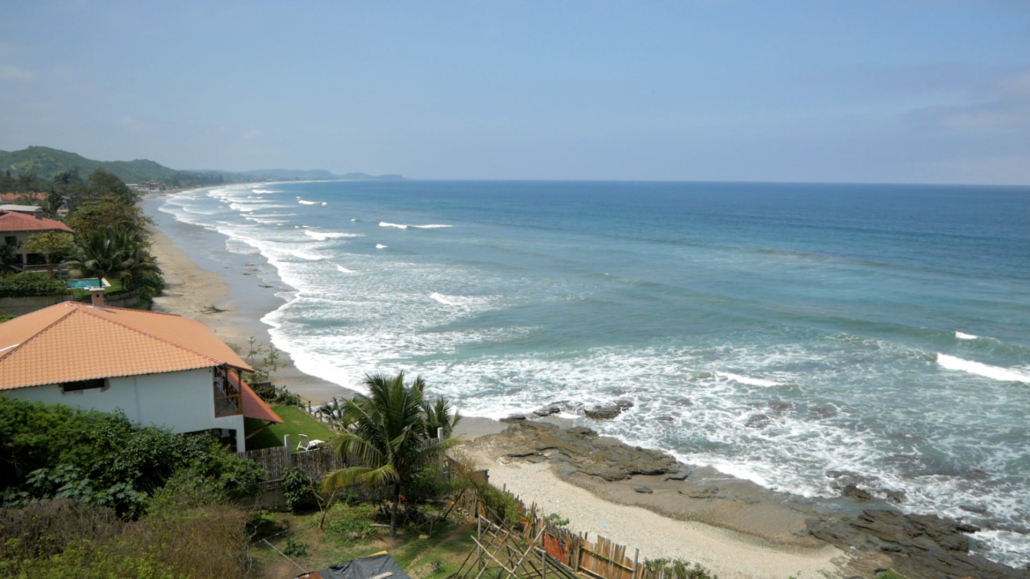 Everyone is so welcoming and friendly here, which makes this number one on our Cuenca Ecuador Pros and Cons top 10 things we LOVE about living here! The Ecuadorians are very proud of their beautiful country and they’re happy to share it with us gringos. We also have friends from Venezuela, Chile, Germany, Austria, England, Russia, Ukraine and Italy. This is a melting pot and most everyone seems very happy to be here and commingle.

The friendly man in this picture stopped us on the street to talk to us. He was so proud of his country and told us, “Mi país es su país.” That means my country is your country. We LOVE the people here! They are so nice! 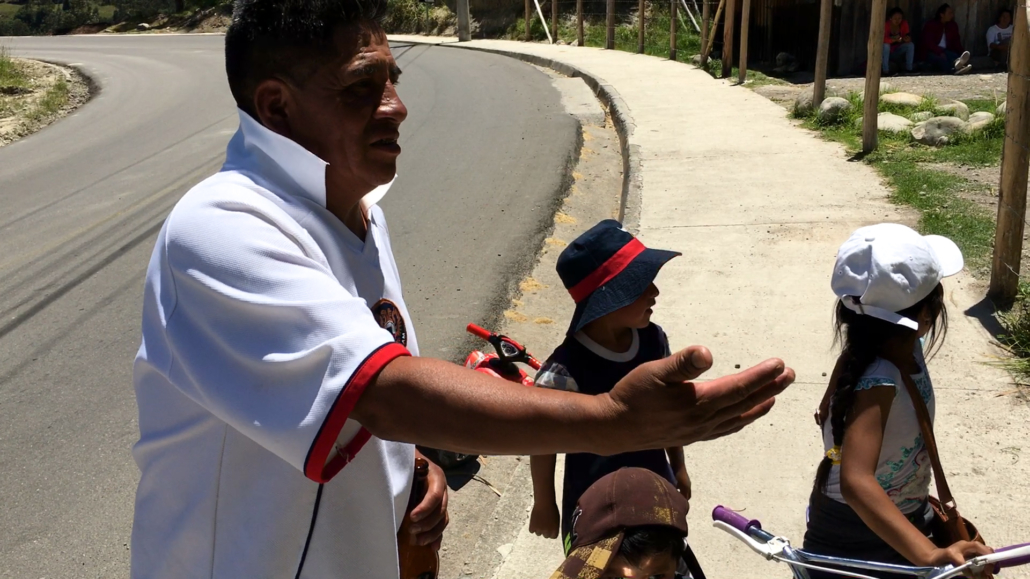 With that said, some of the Ecuadorians are growing tired of the influx of Venezuelans and the resulting drain on the economy. Also, some of the gringos are resentful to be here. Some of them had to move here because they couldn’t afford retirement or medical care back in the states. Many are here out of necessity rather than choice, which would make most people bitter.

Most of the time, these people are the happiest, most tranquilo people you’ll ever meet. But put them behind the wheel of a car and they turn into Freddy Krueger. You literally take your life into your own hands every time you cross a street. Pedestrians do NOT have the right of way here, not even at crosswalks or with green walk signs. You have to be a very defensive walker.

As I’m writing this sentence right now, the neighbors car alarm is going off just outside our gate. The woman is sitting in the car while the alarm is going off… She finally disarmed it after at least 30 seconds of horn honking and sirens.

The Ecuadorians and Latin Americans in general don’t seem to have the same issues with noise as we do. They’ll stand in front of their cars having a conversation while the alarm is blasting. House alarms are a constant. Loud buses, gas trucks, churches, fireworks, parties…you name it, can be heard at all hours of the day and night.

We’ve gotten used to most of it, but the car alarms still grate on our nerves. Everyone has one, but no one pays any attention to them.

They’re phasing these out so they won’t be a problem for much longer, but they’re a nuisance now. The worst part is getting stuck on a narrow street when one of them drives by. It’s impossible to breath. 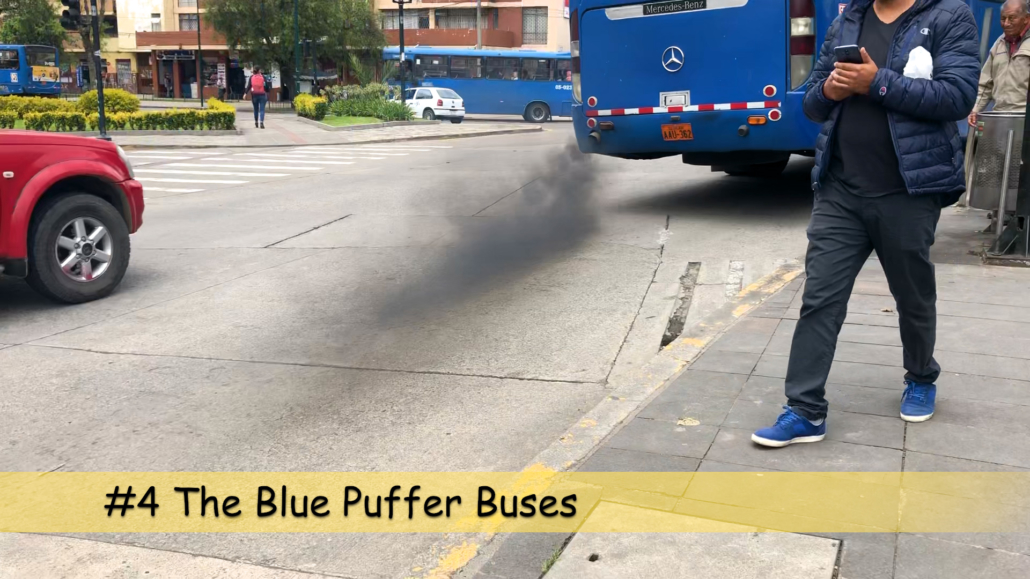 We take this for granted in the states because we have so few stray dogs or unleashed dogs on the streets, but here it’s a totally different environment. People (mainly macho men) refuse to get their dogs neutered so they procreate like crazy and it’s nearly impossible to keep their population controlled. 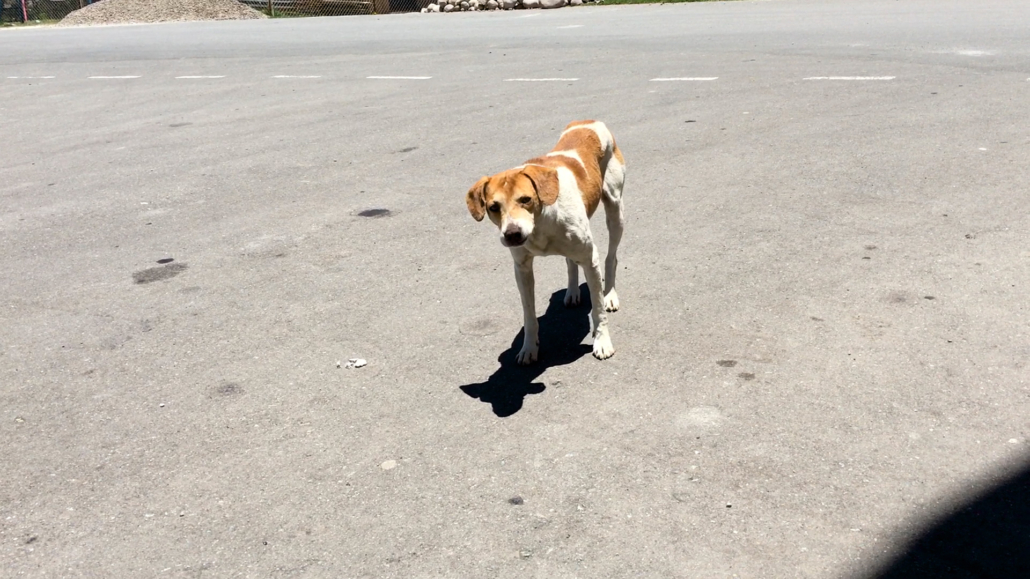 Ecuadorians also have a cultural preference for small dogs under 10 pounds, especially under 5 pounds like our little Alicia. That means they love their puppies, but once the puppy grows up, it’s common to kick them out to the street or dump them somewhere else. The dog rescues (Los Amigos de Manolo pictured below) are full of big dogs that no one wants; the little ones get adopted almost immediately. 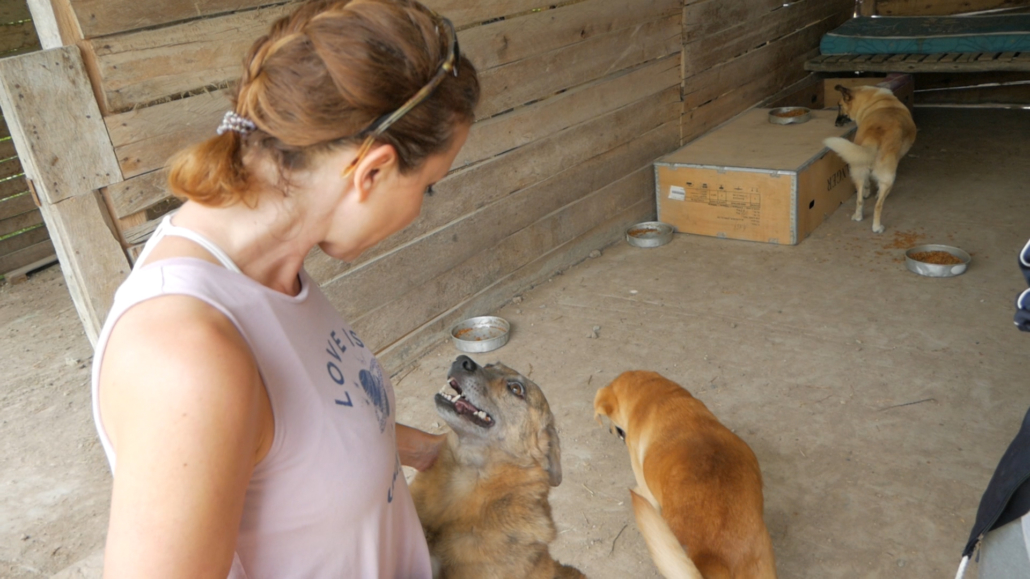 Most of the dogs in Cuenca look healthy, but just outside Cuenca in the surrounding areas, as well as in Quito and on the coast, the dogs look very malnourished. We were told that there’s a common ailment here that causes the dogs to be very skinny. It requires expensive antibiotics to cure, which most people can’t afford.

As vegans and animal lovers, it’s really hard for us to see so many dogs without loving homes and a stable diet.

As vegans, this is the hardest part about living here and there’s NO WAY we would show a picture of it. The street-side pig roasts are the most horrific thing we have to see, but all kinds of mobile street grills are common throughout Latin America. On any given afternoon, you can’t walk down a street without seeing (and smelling) grills covered in pork, beef, chicken and cuy (guinea pig).

We’re told the meat here doesn’t taste very good, either. Since it’s usually not stored in refrigeration, it must be THOROUGHLY cooked to destroy harmful bacteria, which leaves the meat tough, stringy and tasteless.

It’s really a tragedy that these animals are raised for months or years, often in horrible conditions, to end up as an overcooked piece of tough, flavorless meat to be consumed in less than 5 minutes by someone who doesn’t give the animal (or the environmental destruction) a second thought.

It just doesn’t make any sense to us, here or anywhere in the world. ?

While there are a few things we don’t like about Cuenca, the pros FAR outweigh the cons. We love living here and have no desire to live anywhere else right now. It’s a great place for vegans, or anyone who is looking for a higher quality of life with a much lower cost of living, surrounded by friendly, welcoming people.

Whether you’re looking for a new place to live or an extended vacation, Ecuador, and especially Cuenca, should be at the top of your list.

Be sure to check out our second Cuenca Ecuador Expats Pros and Cons list.