We couldn’t live at Villa de Los Sueños forever and we eventually had to go back home to Cuenca Ecuador. This video covers our CLP Bus to Guayaquil Ecuador from Olón, including the Guayaquil Bus Terminal and the busetas that run between Cuenca and Guayaquil.

We took a taxi from Guayaquil to La Entrada on our way to the Ecuador Coast, but after speaking with some of the other guests and getting more information from Marsha at the B&B, we decided to take the CLP bus back to Guayaquil Ecuador.

The Cooperativa Libertad Peninsular (CLP) bus was much nicer than the other buses we have taken in Ecuador. The seats were comfortable, the ride was smooth and it didn’t stop as much. I was even able to sleep for about 30 minutes during the 2 hours and 45 minute ride from Olón to Guayaquil, something that NEVER happens to me on public transportation.

Once we got to Guayaquil, we took a taxi from the bus terminal to the Operazuaytur buseta office to catch our small bus back to Cuenca.

Other videos from this trip: Ecuador Coast 2018

This is the tiny bus station in Olón Ecuador from where the CLP bus to Guayaquil Ecuador leaves. It also stops in Montañita, which is only about 10 minutes from Olón on the way to Guayaquil. The cost was $7 per person one-way, which is about double the cost of the regular interprovincial buses.

The bus was large and very nice. It had a smooth ride and didn’t stop as much as the interprovincial buses to pick up passengers along the way, although it did stop more than we thought it would.

A Taste of Ecuadorian Driving

These two guys are transporting a large flat screen TV on a motorcycle…on the highway. Think about that for a minute. He’s basically carrying a sail in a high-wind zone. ¡Que loco!

This guy is on track to win the Darwin Award. You can see in the video that he was on his phone the entire time I filmed him while he was riding his motorcycle on the highway. Dude. That’s a toilet posture. You’re not on the can! You’re on the highway! On a motorcycle! Pay attention!

Religion is a big thing in Ecuador, but I’m always surprised to see commercial vehicles with religious iconography on them. This translates to “King of Kings.”

This is the Terminal Terrestre de Guayaquil or the Guayaquil Bus Terminal. It’s located just north of the airport. As the crow flies, it would be about a 5 minute walk from the bus terminal to the airport terminal. However, you can’t walk how the crow flies. It would probably be about a 20 minute walk going several blocks out of the way, so the cab drivers make bank charging $5 to drive people the relatively short distance between the terminals. 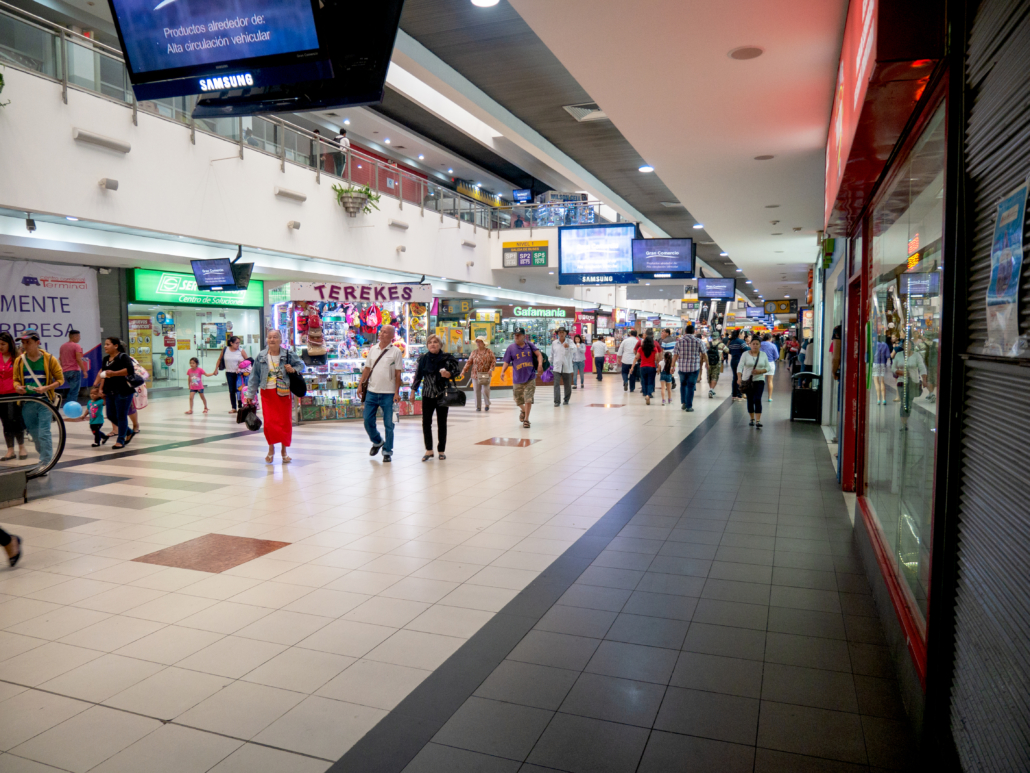 We were VERY impressed with the bus terminal! It was basically a giant shopping mall packed with people coming and going. The restrooms were big, super clean and energy efficient. As usual, the men’s restroom was very quick. It had lots of urinals so I was in and out of there in under 3 minutes. The women’s restroom was a different story. Amelia said it was packed and chaotic, so she opted to wait until we got to the buseta terminal a short cab ride away.

The taxis are located just outside the north entrance/exit on the main floor of the Guayaquil bus terminal. Our diver saw that I was filming and gave us a pose, making his fellow drivers behind him laugh.

These guys were goofing around waiting for the buseta to leave at the Operazuaytur buseta station. Everyone is so friendly in Ecuador, especially to us gringos. They seem to really get a kick out of us, as you’ll see in our videos.

Unfortunately, I didn’t get a picture or usable video shot of the Operazuaytur office, but they were moving to a different location a few days after we were there so it really wouldn’t help anyway. The new office is only a block away, and both are very close (walking distance) to the airport. The busetas cost $12 one-way between Cuenca and Guayaquil. I’m not sure where else they go.

We really liked taking the busetas (small buses) through Cajas National Park rather than a big bus. The mountain roads are very curvy with steep inclines and declines so the smaller buseta is able to handle them much better. We took a large interprovincial bus between Cuenca and Machala and the motion almost made me sick. I was able to acquire some motion sickness pills for the return trip.

I bet you didn’t know Mike Wazowski could skateboard! Ecuador is full of murals and I thought these were pretty cool leaving the airport area (more shown in the video).

The Drive from Guayaquil to Cuenca

American brands are so common here that sometimes it’s easy to forget we’re in a foreign country. The buseta terminal was directly across the street from a Holiday Inn and there was a Sherwin Williams paint store and a Formica store in the same area as the buseta terminal.

Sugar cane is one of Ecuador’s exports, along with chocolate, fruits and flowers. This is a baby sugar cane field that was probably planted within the previous month. The sugar cane will be almost as tall as those trees in the middle of the field once it’s fully grown.

It takes about an hour and a half from Guayaquil to reach the base of the Andes Mountain range. Then it’s a quick climb to ascend through the clouds.

Be sure to check out Part 1 in this series to see more beautiful shots of Cajas National Park.

Amelia is an expert sleeper. I almost never nap on public transportation, even overnight flights. But it’s common for Amelia to be asleep before they close the door. I’m certainly envious of that trait. Especially when I have to sit there and watch her head bob up and down while I’m bored silly!

We hope you enjoyed our trip from Olón to Guayaquil and then to Cuenca, Ecuador in the fifth and final part of our first trip to Ecuador’s Southern Coast. Please remember to like, comment and share our video, and also subscribe to our YouTube channel. If you’d like us to make a video about something specific or if you have questions, please let us know in the comments. 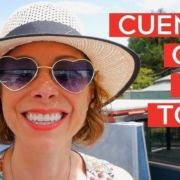