We left Miami on British Airways and headed to Amsterdam via Heathrow. This video shares our journey across the pond, Amelia’s drama on the airplane and our Amsterdam AirBnB Apartment Tour in the Jordaan neighborhood.

Drama on British Airways from Miami to Heathrow

Our flight on British Airways from Miami to Heathrow left late at night so we were already tired when we boarded. About an hour into the 8 hour flight, they started offering the meal service. As is common, the vegans, vegetarians and food allergy people got theirs first.

Even though I was tired, I was even more hungry so I ate mine right away. The entree was a delicious rice pilaf with steamed mixed vegetables. It came with a vegan bun, vegan butter, mixed fruit, a small salad and a granola bar. After eating the entree, salad and fruit, I promptly fell asleep after setting the remaining items aside for later. Amelia ate part of her salad and then fell asleep.

When we woke up, both of our meals were gone! Amelia had not even opened her entree! But they took everything while we slept! Even my packaged items!

Unfortunately, they don’t stock extra vegan meals, so they couldn’t just bring Amelia another one. I’ve never seen her so mad about something before! She rang the call button with a force unbecoming of my little hummingbird and let the flight attendant have it.

The attendant was very apologetic and went to see if there was anything they could bring us. The head flight attendant returned with a few packaged vegan items and offered to give Amelia the vegan salad she bought for herself at the Whole Foods in Miami. Amelia refused to eat the generous woman’s food, but what an amazing gesture!

The flight attendant was vegetarian and lactose intolerant so she ate a mostly plant-based diet and could empathize with us. That’s a long flight to not have any food, especially when we went to the trouble of pre-ordering a vegan meal. Hopefully, they’ll learn a lesson from this and stop removing uneaten food from sleeping passengers 2 hours into an 8 hour flight.

We had a 3 hour layover at Heathrow while we waited for our short flight to Amsterdam. It was lunchtime in England so all the food places were packed, but that didn’t matter for us because NONE of them had any vegan options! At least nothing more than a plain salad or steamed rice.

We packed some PB&J’s for our trip and still had 2 left so weren’t going to starve, but after a long flight with our absconded meals, we wanted something other than yet another PB&J.

Luckily, Starbucks came to the rescue! They had a vegan breakfast wrap! We washed it down with a giant coffee and were good to go! Thank you again Starbucks for having vegan options!

This was our first time staying at an AirBnB. We checked hotel prices in Amsterdam and almost cut our stay short due to their extreme cost! However, someone else on YouTube mentioned AirBnb so we looked into it and were shocked to find much lower prices for a full apartment in a desirable neighborhood.

We stayed at the listing titled: Amsterdam Center Entire Apartment.

On our first night in Amsterdam, we went to SLA – Organic Salad Bar for dinner and it was super delicious! It was only a few blocks from our AirBnB in the Jordaan neighborhood. (click to enlarge) 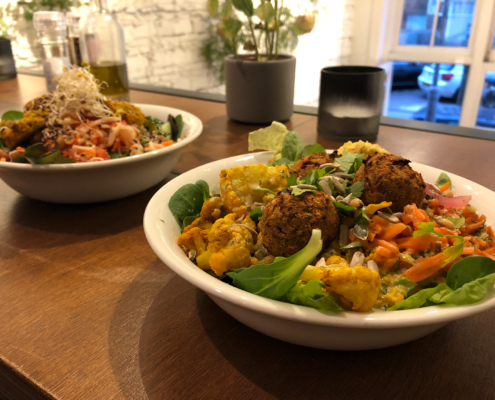 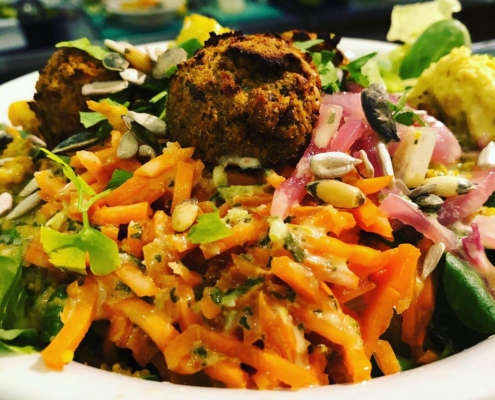 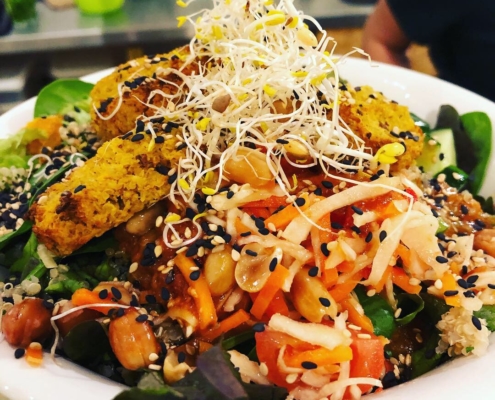 Our First Morning in Amsterdam

Surprisingly, we woke up very early on our first morning in Amsterdam. That’s when we realized the city gets a late start. Nothing opened in our neighborhood until 8am so we walked around for awhile with the streets to ourselves. We turned a corner and saw the sun rising between the church steeples so I snapped a couple shots with my iPhone. What perfect timing! 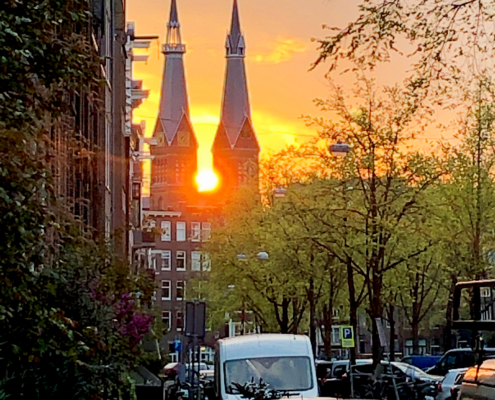 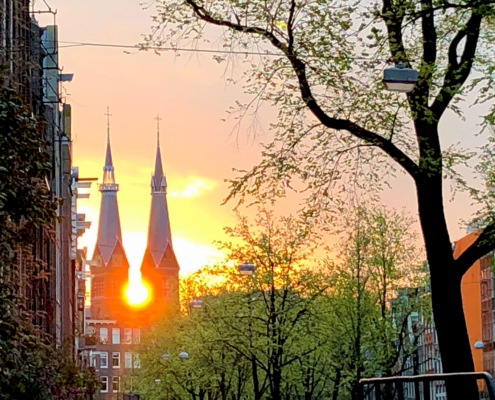 Other videos in this series: Amsterdam

Follow Us
Our Journey from Cuenca Ecuador to South Beach Miami (Episode 94 – Part...